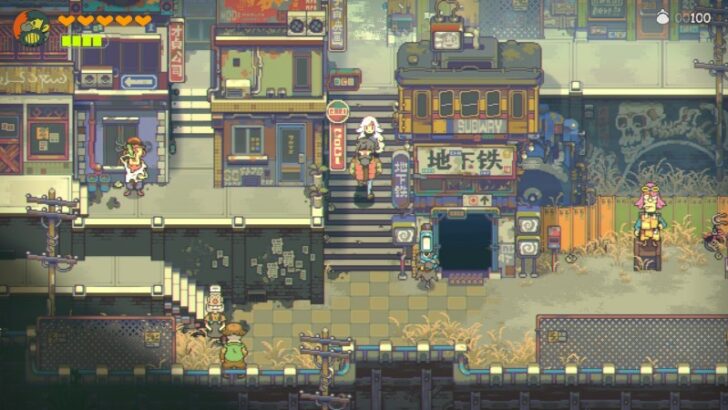 Not to be outdone by Microsoft’s ID@Xbox presentation yesterday, Nintendo held another installment of its Indie World showcase today. The 20-minute video was jam-packed with hotly-anticipated titles, several of which are launching today. If you don’t have time to watch the presentation, consider this round-up a quick snapshot of everything the event had to offer.

Bomb Rush Cyberfunk, a funky game heavily inspired by Jet Set Radio, will be a timed Switch console exclusive and it’s launching in 2022.

Toem is a wholesome photography game set in a beautiful black and white hand-drawn world coming to Switch and PC this fall.

Loop Hero was one of our favorite games during the first half of 2021, and it’s making its much-requested move to Switch this holiday. You can read our review of the PC version here.

Far: Changing Tides, the seafaring sequel to Far: Lone Sails, comes to Switch as well as other platforms and PC in early 2022.

Necrobarista: Final Pour serves as a Director’s Cut to 2020’s Necrobarista that adds new story content and remastered visuals. It also features a new studio mode that allows you to create your own stories and dialogue. It lands on Switch later today as a timed console exclusive

Garden Story, an adorable game where you play as a grape that we recently featured in our list of most anticipated Zelda-likes, gets a surprise launch today as a timed Switch console exclusive.

The dating sim meets dungeon crawler Boyfriend Dungeon comes to Switch later today. It’s a trip, and you can read our extensive preview of the game to find out why.

Hold on to your butts because Axiom Verge 2, the long-awaited sequel to the acclaimed Axiom Verge, is coming to Switch…today!

Shovel Knight Pocket Dungeon is a match-style puzzle game that was announced a while back, but now we know it’s coming to Switch this holiday. Furthermore, scanning Shovel Knight amiibo summons a fairy helper for assistance.

Metal Slug Tactics was one of our most pleasant surprises to emerge during this year’s E3 season, and the colorful strategy spin-off is heading to Switch after previously being confirmed for PC. It also got a 2022 launch window.

Tetris Effect Connected, the multiplayer spin on the beloved Tetris Effect, makes its long-awaited jump to Switch on October 8

Astroneer makes the journey to Switch in January 2022

Slime Rancher: Plortable Edition comes to Switch today, giving you plenty of time to prepare for next year’s sequel.

LumbearJack, a game about using your axe to recycle trash as a happy bear, makes its Switch debut in 2022.

Gang Beasts brings its silly brand of multiplayer to Switch this fall.

The gorgeous Eastward closed things out with a confirmed release date of September 16. It will be a timed Switch console exclusive and stars two characters exploring a ruined yet gorgeous pixel art world inspired by 90’s Japanese animation. You can read more about it in this previous round-up.