Saints Row Reboot Is A Roll Of The Dice For Volition 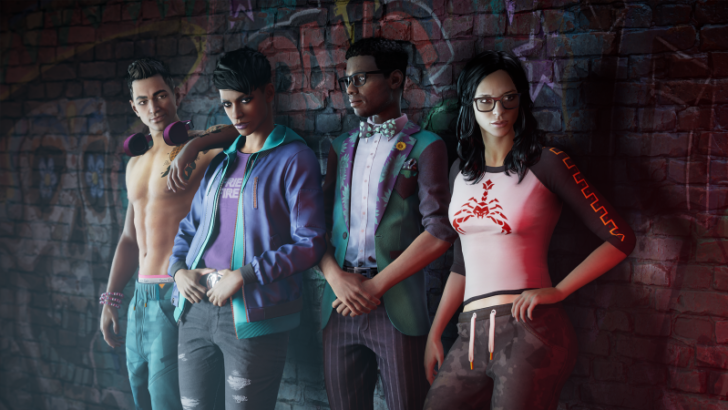 Made official at Gamescom Opening Night Live, Volition is indeed rebooting the Saints Row franchise. And because this is a new starting point for the series, the developer has ditched its numbering scheme and instead simply calls this new entry Saints Row. We had the chance to see what the future of The Saints looks like at a preview event last week.

Volition has taken The Saints nearly everywhere. From a small-time gang in Stilwater to a public-facing crime family taking over Steelport, and running the United States of America before inhabiting a simulation of Earth and venturing into the galaxy after the planet blows up. Even Heaven and Hell couldn’t escape the influence of Johnny Gat and his compatriots. Volition had taken the previous Saints as far as they could. It was time for a new group of Saints to rise to power.

Four young criminals-to-be form the core of this new iteration of The Saints. Once again known as The Boss, your custom character joins Eli, the planner; Neenah, the driver; and Kevin, the thrill seeker. Each chose to break free from personal woes which have stifled them or put them in a position where they decide to take fate into their own hands and create a criminal empire – all while having a good time, of course. When asked whether any previous Saints members will make an appearance, Volition told us not to expect any connections to them outside of little Easter eggs.

The studio made it a point to bring Saints Row back to the contemporary crime genre it grew and thrived in. The team wanted to create relatable, modern characters who face similar obstacles to today’s young adults, like overwhelming student loan debt or being denied work in their desired field. Each character has their reason for joining The Saints, and you’ll get to know all about them throughout the game. Though the characters’ motivations ground them to the realities of modern existence, Saints Row will still be an upbeat adventure full of the series trademark humor.

Their stomping ground is Santo Ileso, a fictional amalgam of the American Southwest, and the stage where The Saints seek to find fortune and infamy. Volition described it to us as “the weird West.” It’s has everything you’d assume to see looking at pictures of areas in Nevada. One area will be full of bright lights and casinos, while another is a luxury area full of posh shopping attractions and spas for the wealthy to enjoy. Expect to see plenty of iconic imagery like colorfully lit Vegas-like streets, giant cowboy boots, bluffs, mesas, and plenty of cacti. Volition wants to make a diverse playground for players to explore, whether that’s by off-roading in the desert or base jumping off a tall building and soaring around in a wingsuit.

Within these districts, The Saints involve themselves in territory wars with rival gangs, take part in classic scams like the returning Insurance Fraud minigame. Players can install criminal ventures around town; a new activity Volition is introducing with Saints Row that lets you create a legit-looking business front with shadier purposes. These businesses breed new missions and gameplay opportunities while allowing players to make their Santos Ileso unlike anyone else’s. Of course, there are plenty of guns and other wacky weaponry, but we didn’t see anything out of the ordinary yet.

Driving is getting an overhaul. A new driving model focuses on car combat where the vehicle itself is a weapon rather than shooting guns out the window. The team dropped movies like Baby Driver, Hobbs and Shaw, and John Wick as inspirations for the kind of action it aims for with this new iteration of Saints Row.

Two players can join together throughout the entire game in an online, untethered co-op experience. Both can explore the world at their leisure or participate in story missions together. According to Volition, everything can be completed together. The dev team also mentioned being able to prank each other, though how that plays out remains to be seen. Adding more goofy activities to do with friends is always a plus in my book.

Saints Row will bring its rebooted brand of criminal hijinx to PlayStation 5 and Xbox Series X/S in 2022. Take your eyes to our hub page for more big announcements and reveals from Gamescom and Opening Night Live!