Should You Play Castlevania: Grimoire Of Souls? 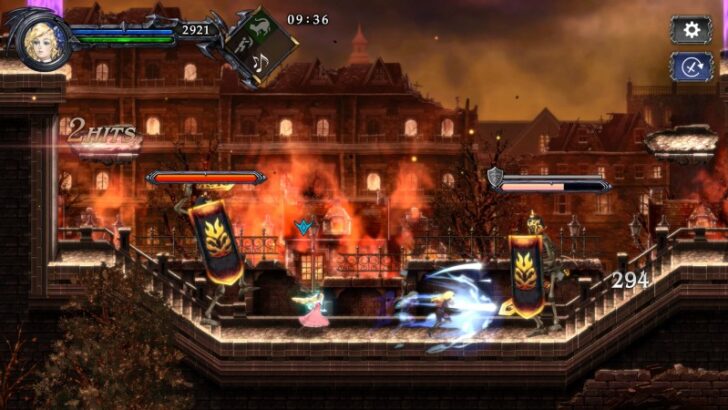 I was surprised a few weeks back to hear about a new Castlevania game coming to Apple Arcade, but I suppose I shouldn’t have been. Apple Arcade has been wisely scooping up desired properties into its portfolio to boost the value of its subscription service, and Castlevania is a great choice. Grimoire of Souls was previously released as a mobile game in Canada, but this newer Apple Arcade incarnation offers the chance for U.S. gamers to try their hand at defeating Dracula and his minions once again. The reworked mobile game also maintains Apple Arcade’s promise of being completely free of microtransactions and other predatory practices.

That’s a strong pitch, and it captured my attention. As a Castlevania fan, I haven’t enjoyed a new entry in the franchise in years, and Apple Arcade has increasingly become my go-to for gaming on my phone; the assurance that I won’t have to deal with MTX nonsense is a strong draw.

Grimoire of Souls makes a strong first impression. Beautiful parchment/charcoal-style art helps to tell the story of the latest threat to humanity, and the ever-returning nature of Dracula and the threat he represents. Familiar music from prior entries swells throughout the opening sequence, and continues through the various gameplay stages; this is a great candidate for popping on your headphones to hear those memorable melodies. The side-scrolling visuals nail the look of a Castlevania game, as does the deliberate yet timing-based focus of combat, filled with quick weapon strikes and dodges.

The plot concept is a little hackneyed, but manages to do the job of bringing together a bunch of recognizable heroes from series’ history. Evil has begun to seep from great books about the history of Dracula and his castle, and you must enter the books to halt the spread of darkness. Thanks to the leading stars of these books, characters who previously fought Dracula join your fight, including many of the greatest hits of heroes, like Shanoa, Simon Belmont, and Alucard, among others. Each hero has their own weapons and powers to improve and upgrade, and brings unique styles of combat to the table. Players can freely hop back and forth between their preferred characters.

Journeys into the books take the form of linear and relatively bite-sized stages, usually with a few bonus objectives to chase for extra rewards. Structurally, this reminded me more of early games in the series, rather than the grand exploration-focused dynamics of Symphony of the Night. You can also adapt the difficulty of a given stage with dynamic modifiers – think no MP regeneration, or the inability to continue if you die – and these add additional rewards into the mix. Fight through one stage after another, beat the boss at the end of each Grimoire (which is made up of many smaller stages) and steadily hold back the tide of evil.

The levels through which you battle do a great job of recalling earlier locales from the series, and feature a nice variety of enemies. I wasn’t blown away by the level designs, though, many of which feel pretty throwaway from a structural perspective. Even in a linear Castlevania game, I would have liked to see more secrets, interesting platforming, and discoveries along the way. As it is, most levels exist as a housing for a few fights. Those battles, on the other hand, begin to ramp up in interest as the game continues, challenging players to pay close attention to enemy attack patterns, and juggle which foe to confront first.

Grimoire of Souls’ biggest problems come from the legacy of the game it was before it came to Apple Arcade. While I never played that earlier version, it’s clear when playing the Apple Arcade release how little has been changed to capitalize on the new MTX-free formula. You still gathering a seemingly endless number of currencies, and sometimes having to deal with daily or weekly rewards that are meant to encourage repeated play. The upgrade systems are almost intentionally confusing, in that way that so many gacha-style free-to-play games can be.

Even though you don’t have to actually pay money, you’re still forced into time-wasting progression systems to improve gear, buy new weapons, or upgrade your character. After many hours of play, I still didn’t fully understand some of the systems pushed on me; in a free-to-play game trying to elicit additional microtransactions, that’s a common tactic to get you lost in the various upgrades and currencies, so you slip up and just eventually buy what you need. That is exactly the sort of nonsense I’m want to get away from when I play a game on Apple Arcade, so this frustrated me in quick order.

Even if I’m not a fan of the progression and grind for materials and currency, I was happily impressed by the solid controls. Mobile action games often struggle to offer decent on-screen controls, but Grimoire of Souls feels manageable. An optional auto-attack option swings your basic attack whenever enemies are in range, while jumps and special attacks have dedicated buttons on the bottom of the screen. Like many mobile games of this style, your better option is a dedicated gamepad, but if that’s not an option, you’ll be able to make your way through the levels just fine.

Castlevania: Grimoire of Souls looks, sounds, and feels like a true game in the franchise, and longtime enthusiasts will enjoy the presentation, not to mention the frequent callbacks to lore that the characters bring up throughout their conversations. I’m pleased to see a new entry for the franchise on Apple’s excellent subscription service.

With that said, it’s really too bad that Konami didn’t choose to do more to adapt the game to the microtransaction-free model, and strip out some of the systems that were clearly in place to elicit purchases in that earlier version. While the sidescrolling action formula is acceptable, the real success story would be a genuine new gear-gated exploration game on Apple Arcade, in the vein of Symphony of the Night, Aria of Sorrow, or Portrait of Ruin. Barring that revelation, Grimoire of Souls partially scratches the itch that players have for a new Castlevania game. You’ll love that it’s a mobile Castlevania game with no free-to-play shenanigans, but you’ll undoubtedly sense their lingering presence in it’s many interlocking upgrade systems.