Should You Play New World? Beta Impressions From The Frontier 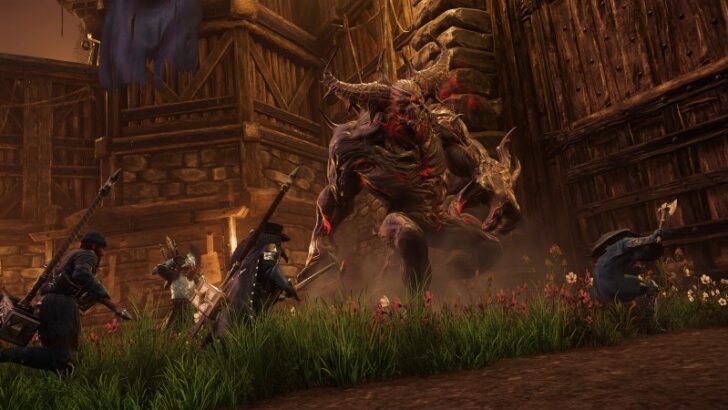 Amazon Games’ upcoming MMORPG New World is in the spotlight as a lengthy closed beta session shows off the action ahead of an August 31st release. New World has changed its vision multiple times over the course of development, and now the question on everyone’s mind is – where is this going to land on release? What kind of player is it for? What kind of MMORPG is it? And perhaps the most important question, is it worth your time at all? Over the course of the beta (and a demo session that took me into an endgame slice with a fully-geared character), I’ve seen some areas with huge potential that are currently underserved in the MMORPG space – and some others that could be intense detriments for the title. Let’s talk about New World!

If you’re familiar with survival games that have you punching wood to get a house going, New World delivers on this front initially by giving the player myriad survival pursuits. Hunting turkey on the borders of your established safe zones to raise your cooking skill and create rations is far more engaging than it has any right to be. Hunting down elusive saltpeter deposits in mines and crafting your own shells for your old-timey rifles feels fun. Being able to skill up in everything to your liking is a classic system à la Runescape, and its nice to know you can work up every single crafting and gathering skill if you wish, right down to doing some fishing. Banging together your first batch of gathering tools is actually freaking awesome.

Digging up carrots and potatoes feels meaningful. Coming back to your town in the middle of the wilderness to trade feed and talk with your fellow explorers has all the allure of bustling about Disney’s Frontiertown, and I’ve rarely had so much investment into crafting and trading systems in MMOs. I can see potential problems with these aspects later down the line, i.e. do I really want to spend my time in the endgame gathering resources just so I can play the game, but for now, there’s plenty of magic in creating my own food, ammunition, and supplies before I trek out into the wild. It feels gritty, it feels raw, and it feels fresh.

Faction PVP can be a lot of fun

Territory control and faction-based opt-in PVP not only bring back a bit of realm-vs-realm feel from the glory days of Dark Age of Camelot, but they inject something that many online experiences have moved away from in the last decade – social interaction. That means yes, you are going to see a player named PoopyPants (Yes, this was a real player I saw) cutting down trees and screaming outside of town about the price of silver ore, and your chat feed is going to be inundated with comments that make the infamous Barrens chat look downright erudite. However, it also successfully adds shared social stakes to the experience, even if you choose not to interact at the verbal level with any other players. By funneling players into three different factions, you have an investment in your tribe regardless of how deep you want to take it. If you still just want to solo and bring back a load of furs to trade in town, you can – but the real fun is to be had by grouping up, interacting with others, and eventually taking over some territory as your chosen faction.

At the solo, guild, and greater level, having game flow dictated by players instead of the “theme park” experience is a bold choice and more than a bit refreshing. The issue here is how interesting and meaningful are these faction wars going to be in the endgame? While I don’t have the answer to that yet, the prospect of really engaging with other players in a meaningful way in a MMORPG gives me a powerful nostalgia bump and some serious differentiation from many other genre offerings today. On the flip side, if you’re not really interested in territory wars or PvP, other existing MMORPGs might be a better choice.

In almost every MMORPG, you’re going to be doing a ton of combat. It’s probably the biggest portion of the entire gameplay experience. With limited skill options, awkward animations, and very little excitement, New World’s combat is decidedly dull. Now, there’s something to be said about popping an opposing faction member from a great distance before you engage in a 3v3 skirmish that gets real greasy, but that’s more about the player-to-player interaction than the combat, which can often feel wooden and wonky. While I enjoy systems that attempt to break the genre out of the tab-targeting standard that’s been grandfathered into MMOs for ages, it misses the mark here.

I found it hard to determine if the other aspects of the game that seem enjoyable can carry this particular aspect either, as combat is the core of almost every other pursuit. Even if you’re just spelunking for saltpeter, you’re going to have to fight a ton of various zombie-like creatures, wolves, or bears, and it simply does not feel good. This problem is exacerbated in group experiences, both PvP and PvE, but more pronounced in the latter. Chewing into spongey opponents as a pack with the glaring lack of feedback from weaponry is almost comical, and your options in combat feel extremely limited and lacking.

Everything can feel the same

Enemies, locations, and activities can become a big bowl of mush without breaking it up with some PvP pursuits. You’ll see many of the same rickety little fishing villages, decrepit farms, and crumbling ruins as you traverse the giant world. Killing some undead buccaneers at level 5 feels the same as it does at level 15, and you’re going to be doing a ton of daily-quest/fetch style activities in order to grind out your faction reputation, like wandering around the aforementioned locations for boxes and killing X undead baddies. It feels intensely repetitive even after only twenty hours of gameplay, so I’m concerned about how that will translate to the endgame – will I still, as an elite member of the Syndicate, still be wandering farms killing undead and picking taters? I mean, I do like picking taters…

When you’re just starting, it’s fine that you’re walking everywhere because you don’t have far to go. However, this takes a turn at around level 12, where you’ll find the autorun button and some movies on your favorite streaming platform to be your best friends. The world is large, and traveling it all on foot is a huge pain. Without mounts, and the fact that fast travel is limited by resources, moving around the map is an absolute bore and a chore. I realize there are other meaningful concerns that probably flow into this decision, like the implications of having everyone zoom around in a game that’s attempting to create stakes with territory control and PvP, but this becomes harder and harder to ignore the more you play and get quests on opposite ends of your map.

Based on the beta, New World is going to be an interesting but potentially niche addition to the current crop of MMORPGs. However, it seems to really serve players that want to play with small groups of friends for faction skirmishes and that are interested in greater territory control wars with big guild politics and all that. If you’re not interested in that kind of greater pursuit with plenty of social interaction and PvP, the PvE elements by themselves do not seem compelling enough to keep things rolling.

While I love the feeling of crafting my own stuff, slowly increasing the areas that I’m strong enough to explore, and fastidiously upping all my gathering and crafting skills, I can see those charms fading rapidly as the activities become somewhat rote. The dynamics involved in faction wars and territory control seem to be the peppy antidote for the never-ending rock farm in various undead shacks and homesteads. As with other games that lean into this kind of emergent gameplay (RIP Shadowbane), some of New World will be what players shape it into.