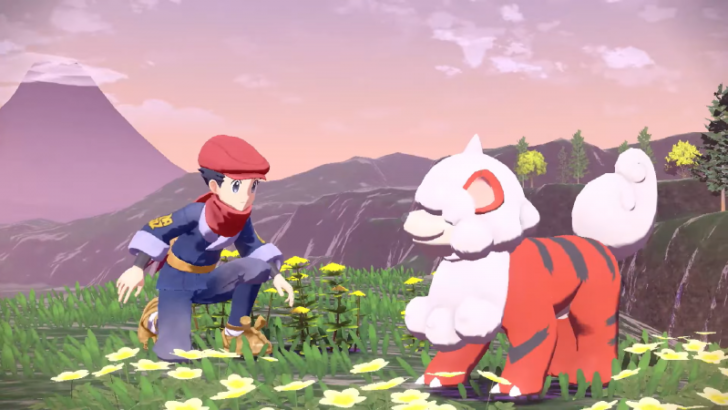 After months of lacking new information on Game Freak’s upcoming Pokemon title, we finally got a fresh look at Pokemon Legends Arceus! From new locations to new Pokemon, ways to get around, new battle strategies, and more, here’s a breakdown of what we learned from today’s trailer:

The trailer begins with a shot of Bidoof and Starly wandering on a hill, and while this screenshot doesn’t convey it, these Pokemon are moving at a much higher framerate than in the announcement trailer. It’s a huge improvement technical improvement right out of the gate!

We caught a glimpse of this bay in the previous trailer, but the family of Buizel and Floatzel is new. There’s also a disconnected archway, a distant bluff, and islands sitting in the background waiting to be explored. The clouds peppering the sky give texture to the scene as the sky fades into a potential storm on the horizon.

Our first glimpse of a snow-covered portion of Hisui begins with a trainer creeping behind some Swinub and Piloswine, two stalwart ice Pokémon in their natural habitat. Due to its original positioning on the Diamond and Pearl map, this winter wonderland is possibly at the North end of the island, though we don’t know how Sinnoh’s climate has changed over the years.

We also get a look at fan-favorite Gardevoir and a pair of Raltz taking a stroll near an icy river. From the looks of things in the trailer, evolved Their pre-evolutions may often accompany pokemon.

Time Of Day And Weather Affect Which Pokémon You’ll Find

Clefairy is said to have come from the moon, so it’s quite an apt scene to have them basking in the moonlight. Pokémon Legends Arceus will feature day and night cycles, as well as different weather conditions as you roam the lands of Hisui. Depending on what time of day or the weather is like will determine which Pokémon will appear in an area.

Places like the beach may see different herds of Pokémon like Shellos and Gastrodon rolling though when the weather turns to rain like in the shot above.

The Land of Hisui may one day become the Sinnoh region, but in the bygone years, there existed Pokémon we have not yet been familiar with. Above is the first new addition to the Pokédex: the majestic Normal/Psychic Pokémon named Wyrdeer, an evolution to Stantler.

Next, we met Hisuian Growlithe, a Rock/Fire variation of the best pupper from Kanto. The hairmut on its head is made of a fragile stone that can break in battle. Needless to say, we are very excited to see what Hisuin Arcanine looks like, as it wasn’t present here.

Joining Growlithe with a new Hisuian form is Hisuian Braviary, a Flying/Psychic-type. Its first appearance in the trailer is after catching a trainer leaping off a mountain, where together they soar away. This Pokémon can be used to fly through the skies of Hisui, making travel from place to place a breeze.

Our final new Pokémon revealed is an evolution to Basculin, which becomes the Water/Ghost Basculegion. Keeping with the tradition of strangely dark Pokémon stories, this fish is filled with the souls of other Basculin who couldn’t survive the trek upstream and uses these spirits in battle. Like Hisuin Braviary and Wyrdeer, Basculegion can be ridden by trainers.

A Look At The UI

Throughout the trailer, we can see the user interface displayed in the bottom corners of the screen. On the left, there are three icons: one that looks like a cell phone – odd for a game set in the distant past – which can be accessed by pressing the minus button, an item menu set to up on the d-pad, and down will get you to a journal (possibly your Pokédex).

The interface on the right corner is where you cycle through which Pokéball to throw at wild monsters or which Pokémon you have on hand to initiate battles. In this photo above, the trainer is choosing to fight the Hisuian Growlithe with a Vulpix. The other Pokémon in the party are Bidoof and Starly. It’s a big change from previous Pokémon games but should give the player a more immersive catching and battling experience.

A Mysterious Rift And Rage-induced Pokémon

During the trailer, a void is ripped in the sky where bolts of violent energy emerge and strike the ground below. Following the event, we’re shown wild Pokémon with glowing red eyes, an obvious sign not to confront them unless you’re absolutely prepared.

We get shots of Ursaring, Luxray, Gyarados, and Probopass, sometimes tied up in a battle with the player’s Pokémon, but mostly chasing and attacking the trainers themselves. This is the first time in the series where trainers are physically participating in battles.

Though the characters in the trailer are only shown using items or tossing Pokéballs, the crimson-eyes monsters can make contact and damage the player in some way. When the Luxray above connects with the trainer, the screen darkens around the edges of the screen. We’re looking forward to finding out more about these special Pokémon and what is causing them to be enraged.

It’s Not All Wilderness

Despite the focus on the open wilderness of Hisui, there are also towns to explore. Here we see the main drag leading to a large building emblazoned with the symbol of Galaxy Team, an organization you’re working for to complete the first Hisui Pokédex. Looks and sounds pretty similar to Diamond and Pearl’s Team Galactic…

Also in the towns are smaller buildings like this hairstylist. Game Freak hasn’t tipped its hand quite yet on what kind of customization features this game will have, but my money is on this business being the place to go to switch up your style.

Out in the world, players can find camps where they can presumably rest up their team and access items or other Pokémon.

Pokémon battles, as you know them, have changed, and we get a quick look at one of those changes in the form of Strong and Agile Style moves. During combat, when selecting which attack a Pokémon will use that turn, you sometimes choose to make it Strong Style or Agile Style. Choosing Strong Style will increase the damage of the attack at the cost of speed.

Inversely, Agile Style with up the speed of attacks while reducing the strength at which they hit. Adding to the transparency of battles is a list on the right side of the screen displaying the Action Order. As seen above, choosing Strong or Agile attacks will update the now visible Action Order and allow the player to plan out their future turns.

Characters And Your Starters

Because the land of Hisui is the past version of the Sinnoh region, you may see some familiar-looking faces on your adventures. Standing out the most is the ancestor to Diamond and Pearl’s Professor Rowan, Commander Komado.

This purple-hatted fella is Professor Laventon, a member of Galaxy Team’s Servey Corps. He’s the one looking to create a complete Pokédex for the region.

And this is Captain Cyllene, a strict leader of the Survey Corps. We’ll learn more about these characters as we venture through the story of Legends.

From the fine folks at Galaxy Team, you’ll be given the choice of which Pokémon to take on your adventures. Mixing up the options from the typical Sinnoh starters, you have Oshawott, Cyndaquil, and Rowlet to choose from. A great combination of Pokémon from throughout the generations!

And those are the big beats from the new look at Pokémon Legends Arceus. You can watch the full trailer right here to see everything in motion. We’re just a few short months away from when it releases for Nintendo Switch on January 28, 2022. What else are you waiting to see in this game? Are there features, Pokémon, or characters you’d like to see profiled on the lead up to release? Please let us know in the comments, on social media, or in our new Discord!