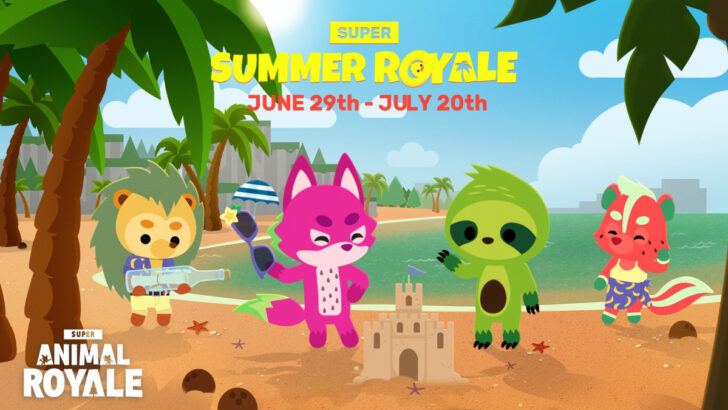 Hey super animals, the island is heating up and that can only mean that Super Summer Royale is here!

Alongside the usual guns, bananas, and projectile birds, you’ll now find fruit baskets scattered around the island that can be redeemed in the Summer Event Shop for 8 new limited-edition summer cosmetic items and 17 legacy summer items. Survive longer to earn more fruit baskets and be sure to start hunting early, to grab as many as you can before the event ends July 20!

But most importantly, you’ll now find beach balls along the shorelines that you can and should kick. Just try not to get…you know…killed while you’re playing beach soccer.

We want to extend a huge thank you to all of you for making our debut in Xbox Game Preview such a huge success! Thanks to you, the population of Super Animal World more than doubled within the first two weeks and we’ve enjoyed meeting so many of you and hearing your suggestions and feedback. We’re already hard at work implementing a bunch of it.

First off: we’ve added controller button bindings in this update so you can now customize your controls on Xbox! We’ve also had good conversations with some of you about ways to fine tune the feel of aiming with a controller. We’re particularly focused on tweaking the design/distance of the aiming reticle and the way the left stick affects movement/aiming. You should see some of these tweaks in our next major content update.

Another highly requested feature has been cross-platform parties so that you can squad up with your friends on different platforms. There’s some technical complexity associated with it, so we can’t yet confirm exactly when it might be added, but we understand how nice it would be so we’re actively looking into ways to support it! We’ll update you as soon as we have more info.

Thanks also to those who have been suggesting new animals, outfits, gameplay mechanics, and other new features in our Discord server! We take all of your feedback into account as we’re planning our next updates and we couldn’t be more excited to share the surprises we have in store for all of you in the months ahead.

☆☆☆☆☆
298
★★★★★
Get it now
This game is a work in progress. It may or may not change over time or release as a final product. Purchase only if you are comfortable with the current state of the unfinished game.

It’s fight for furvival! Super Animal Royale is a 64-player, frenetic, top-down 2D battle royale where murderous animals fight tooth, claw, and machine gun across an abandoned safari park. Collect and customize your favorite critters and weapons, then put them to work in solo matches or team up as a squad of up to four players!
Key Features
• Survival of the Fittest: Scavenge a variety of powerful weapons, armor and items to become the apex predator in intense 64-player online matches.
• The Superest World: Explore a massive, beautifully illustrated 2D island and discover its hidden lore, by chatting with its inhabitants and scouring its rich environments for clues.
• Different Stripes for Different Fights: Collect hundreds of animal breeds and customize them with thousands of cosmetic items, weapons, outfits, and even umbrellas!
• Evolving Events & Updates: Enjoy an endless stampede of new content, including seasonal outfits, animals, and weapons to collect.
• The Fast and the Furriest: Flatten your foes while rolling dirty in a Hamster Ball, or mount a Giant Emu and peck your way to the promised land.