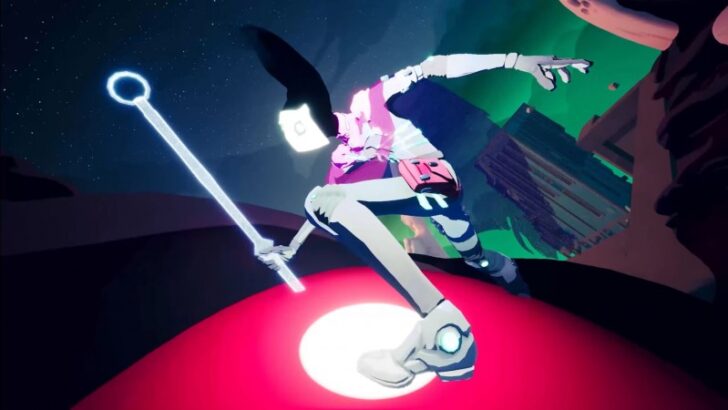 It’s been a little over a year since Heart Machine’s second project, Solar Ash was unveiled during Sony’s PlayStation 5 reveal event, but the wait for this fast-paced, interstellar adventure is almost over. The game’s eagerly awaited release date was officially announced today during the Annapurna Interactive Showcase, and it’s only a few months away.

Solar Ash’s trailer didn’t reveal many more details about the game’s world or its story but did include one piece of information we’ve been waiting for all year, the launch day. You’ll be able to grapple, weave, and fight your way through the cosmos when Solar Ash comes to PlayStation 5, PlayStation 4, and PC on October 26.

Heart Machine’s anticipated title was only one highlight of the indie publisher’s show today, which overflowed with gorgeous games. Among the visually stunning participants were games like The Artful Escape, a soul-searching rock experience where you play as a musician hoping to make a name for himself despite feeling overshadowed by his famous uncle’s legacy. Neon White, a game from Donut County creator Ben Esposito introduced earlier this year, also made a welcome appearance. The first-person shooter meets card game follows the story of a demon assassin plying his deadly trade in an attempt to secure a place in heaven.

If you have missed the latest news on Heart Machine’s upcoming title, we last saw Solar Ash back in June at the Summer Game Fest. The footage showed off more of the game’s signature skating traversal and some serious combat. June’s trailer features a massive, flying example of the world’s largest enemies, Remnants, which Rei takes down by rapidly gliding from one weak point to the next. In her quest to save her home from the world-swallowing danger of the Ultravoid, Rei – the game’s intrepid voidrunner – will face several of these titanic foes.

Still haven’t got your fill of Solar Ash? We have you covered with this look at the game which came out of Sony’s State of Play earlier this year. Solar Ash is out October 26 for PlayStation 5 and PlayStation 4.