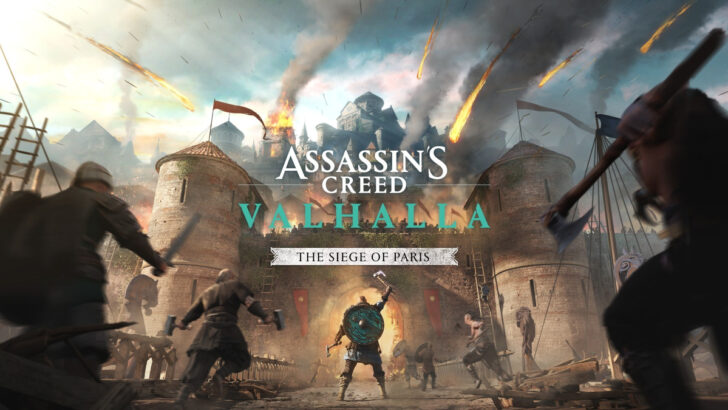 Assassin’s Creed Valhalla’s second major expansion, The Siege of Paris, crosses the English Channel today to set its sights on one of the Frankish Empire’s greatest prizes: the walled city of Paris, teetering on the brink of defeat at the hands of Vikings.

Available now on Xbox One and Xbox Series X|S, The Siege of Paris brings Eivor to a new land, where you’ll discover new gear (including scythes) and new Infiltration missions. Descended from the Black Box missions of Assassin’s Creed Unity and Assassin’s Creed Syndicate, these quests drop you outside of a target’s fortified lair and invite you to find your own path to your prey – and, if you take the time to really explore, to an elaborate, dramatic assassination.

Outside of its titular city, The Siege of Paris offers up three provinces to explore in northern Francia (modern-day France), each filled with their own stories, secrets, and intrigue. You’ll also discover new abilities, including Golden Flame, which lets you tuck a bomb into an enemy’s tunic and shove them away; Goule Breath, which afflicts an illness that sends bystanders running in terror; and Plague of Rats, which summons swarms of rats to devour your foes.

Assassin’s Creed Valhalla players can download The Siege of Paris now with the Season Pass on Xbox One and Xbox Series X|S, or can grab the expansion as a separate purchase. Untold riches sit behind the gates of the future City of Lights, just waiting to be plundered, so heft your favorite axe and get ready to win new glory for the Raven Clan.

☆☆☆☆☆
3
★★★★★
$34.99
Get it now
Relive the most ambitious battle in Viking history. Sail to the war-torn kingdom of Francia and besiege the fortified city of Paris. Fight the merciless forces of Charles the Fat and form strategic alliances to safeguard your clan’s future.

Continue your Viking saga with The Siege of Paris:
• Infiltrate the fortified walls of 9th Century Paris
• Aid the resistance against the Carolingian Empire
• Explore the lush Frankish countryside and sail the iconic Seine River
• Assassinate key enemies in open-ended quests

Upgrade to the Season Pass and get the Wrath of the Druids and Siege of Paris expansions, PLUS the Legend of Beowulf bonus quest!

Build your own Viking legend at 60 FPS and in 4K resolution on Xbox Series X.

Become Eivor, a legendary Viking warrior. Explore England’s Dark Ages as you raid your enemies, grow your settlement, and build your political power in the quest to earn a place among the gods in Valhalla.

– Lead epic Viking raids against Saxon troops and fortresses.
– Relive the visceral fighting style of the Vikings as you dual-wield powerful weapons.
– Challenge yourself with the most varied collection of enemies ever in Assassin’s Creed.
– Shape the growth of your character and your clan’s settlement with every choice you make.
– Explore a Dark Age open world, from the harsh shores of Norway to the beautiful kingdoms of England.