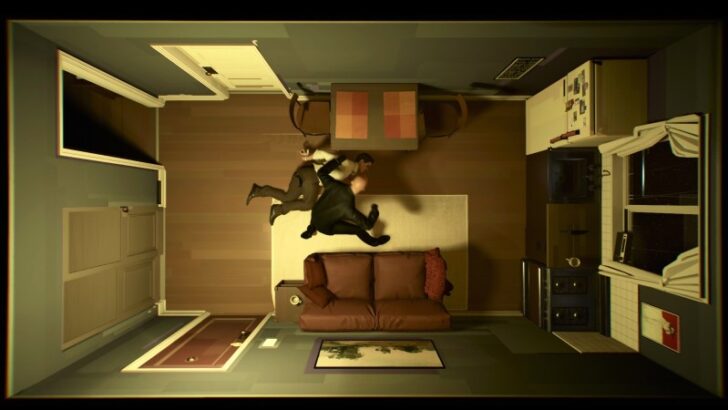 Even five years after its promising premiere at PAX East in 2015, we still can’t wait to get our hands on 12 Minutes. The premise behind this inventive indie game is simple, you are a man stuck in a 12-minute time loop, trying desperately to prevent the death of your pregnant wife. But, in the middle of dinner, a police officer arrives and accuses your wife of murdering his father. Your wife dies during the ensuing struggle and no matter how many times you relive the scenario, the situation always ends in tragedy. The concept is strong, but so is its all-star cast: James McAvoy, Daisy Ridley, and Willem Dafoe. We talked to Dafoe and 12 Minutes’ director Luis Antonio about how this little indie game got such an impressive cast and how the narrative evolved throughout development.

To start, can you set up the game a bit. Where did the original idea come from?
Antonio: My goal was to explore the concept of accumulated knowledge. How would it be if, in a game, you have this information that keeps accumulating. I realized the most interesting aspect is actually not only the factual things of knowing key codes and how to access someone’s computer, but the knowledge that people have about each other. It became more of an intimate story about relationships and uncovering things that you know about other people, and how you as a player deal with that information, since the game itself never tells you what to do. It’s all set in an apartment. There’s the husband and the wife, then there’s the intruder who comes in and disrupts the evening. From that moment on is the unraveling of the stories of these three characters and seeing the layering as you as you go through each loop, learning more about them and their dynamics.

How did you get involved, Willem?
Dafoe: Basically, Luis pitched the game to me. I’ve done some work on games and I like doing voice work. I like many things, but voice work is very special because it’s very freeing and often you’re joining a project that someone has been with for a long time, and they’ve really developed it. In the case of Luis, he walks you through what he wants to see and then you basically use all you have at your disposal, using your voice, to help him see that. It’s kind of a call and response game between the director and the actor that I enjoyed. Just practically, you’re calling for different situations, so you have to have some flexibility. Sometimes you’re working psychologically, sometimes you’re working purely sonically, and sometimes you’re responding to things that he needs to accomplish in the game. It’s a very immediate and very loose kind of collaboration. And I enjoyed it.

You mentioned that you’ve done other games. Beyond: Two Souls is probably your highest profile release. What keeps you coming back to games? Is there something about them that intrigues you or scratches an acting itch you don’t get elsewhere?
Dafoe: I don’t know that I keep on coming back to it. I do lots of stuff, but you know, when someone comes to you with a passion project that has an interesting aspect as far as its structure and how they’re approaching it, you get inspired by that and you try to help them realize it. I also got to say, the time loop stuff is a little bit of a mind bender, that doesn’t quite tickle me, but I do like the idea that the more knowledge you get, the more you realize what you don’t know. Also, there’s something basic to the game that when Luis talks about accumulated knowledge, if you’re awake, and if you’re really playing the game in a full-blown way, it’s interesting to see that it’s reflective on your behavior and your way of thinking.

What was it like working with David Cage? Was it different?
Dafoe: A lot of people respond to that game. I mean, of course it was different, and the difference was that [for 12 Minutes] we were basically recording wild, and also the fact that this is a top shot, and it’s quite a bit different how it’s rendered. With David Cage, we were doing mocap stuff, so we were generating material for the computer people to build the characters. Here we were basically working with our voice, and we aren’t doing it to picture. While we’re doing the physical stuff, so you have the breath and the exertion and the emotional quality, you aren’t actually performing it. With Beyond: Two Souls, we were performing everything in mocap.

How would you describe this character that you’re playing in 12 Minutes? What makes this character tick?
Dafoe: You know, I don’t know. I play situations. He’s an intruder. That’s what he’s called. Some of his story is revealed, and depending on how the player plays the game, he’s a different person.

Antonio: It’s tricky to reply to that question without spoiling a lot of the story.

Okay, sure. So is that all you want to tease for now? Play the game and find out?
Dafoe: Well, I think I said more than that.

Okay, we can move on. Did the character change or evolve through development or once Willem got on board?
Antonio: It definitely changed. Like, until I met Willem and he voiced the character, I never saw the character. As Willem said at the start, the characters were tools to tell a narrative, but once there was a voice behind it, and some problems have to be solved when two actors are interacting, and they’re bouncing off each other, I think that’s when the character came to life. Until then, I never saw them, really.

Do you feel like you brought something special to this character Willem?
Dafoe: You know, you show up. There’s very little way that you can prepare for it. You’re basically working wild with your voice. You know basic scenarios. You know basic intentions of the characters. But it’s instant collaboration. It’s not like traditional performing where you’re presenting your body. You have nothing to hold you down, so you’re totally fluid. You go into that room, and you go wherever your feelings take you and where the director guides you and where the other actors send you. I guess that’s going back to your question about what’s attractive about it. It’s a very loose and lively way to approach things. You don’t really make choices, you react, and you work in many different ways. You stand inside and you stand outside it. You get an opportunity to play with lots of variations, and that’s great fun. When you have that kind of flexibility, and you’ll have that kind of freedom it’s interesting, because when you’re just doing a voice you can be anything. You can be a talking whale, you can be a 500 pound drag queen. You can be anything.

So you’re telling me that this character is secretly a whale? Is that what I’m hearing?
Dafoe: [Laughs] Sure, go with it.

Have you gotten the chance to play the game yet, Willem?
Dafoe: I haven’t. I think it’s not finished. Is it?

Dafoe: I must confess. I love working on these things but I’m not really a game player. When my son was growing up, many years ago, I remember many fierce Sonic the Hedgehog games, but that’s about as deep as I go.

Were you actually working with Daisy Ridley and James McAvoy? When you recorded were they in the room?
Dafoe: They weren’t in the room. It was pandemic times, so we were on Zoom. They were probably in the UK and I was in Rome. I will say that they were both on board before Louis talked to me about the game. They were a real plus, because they’re both very good actors, and that let me know the quality that they were looking for, and I thought it would be fun to play with them. In fact, I did a movie with Daisy, and she’s terrifically talented, and she’s very smart and sweet and a fun person. I must confess that James and Daisy being in it was something that attracted me to this project.

Do you feel like games challenge you in a way that you don’t get from other acting roles?
Dafoe: As you can imagine the audience doesn’t see you. Since you’re doing just the voice, it’s different. It’s not better, it’s not worse. When you’re putting everything into your voice, it’s a kind of intensity and a kind of concentration that I really enjoy. With all performing, there’s that balance between really putting yourself out there in kind of freefall but also you have to develop another awareness of other elements. There’s a minimum of technical elements in this. Rather than shooting, there’s not the kind of camera awareness or marks or things that sometimes can help you but can also restrict you. You’ve got a mic in front of you and basically, you’re just closing your eyes and letting it rip.

I’m good at letting it rip.
Dafoe: There’s something fun and fluid and freeing about that, for sure. It’s fun to do, because it’s so mercurial, and also you have someone whispering in your ear like Jiminy Cricket, who’s telling you “Go this way. Go that way. We need more of this. Come on, lean on him. Back off.” They’re whispering in your ear, and you’re trying to manifest those things with your voice. You’re not showing it, you’re trying to imagine it, and have it come out through your voice. That’s a kind of alchemy that is beautiful.

For more on 12 Minutes, be sure to read our hands-on preview or see how it placed in our list of exciting indie gems.