The Biggest Highlights From Tale Of Arise’s First Chapter 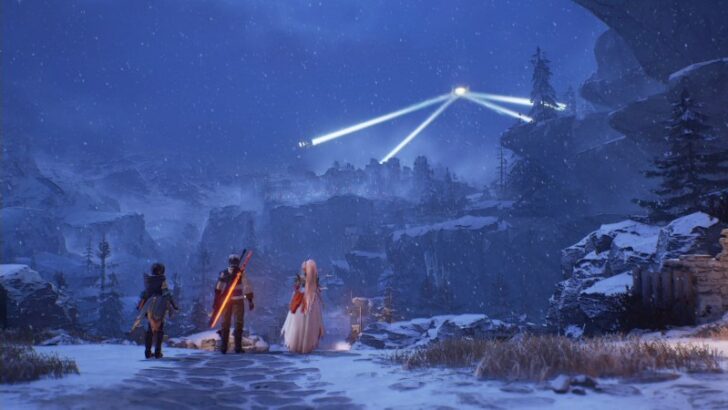 Tales of Arise landed on Game Informer’s cover this month as part of our RPG issue. In it, we go in-depth about our hands-on time with Tales of Arise and talk to members of the development team about what to expect from this reinvention of the long-running RPG franchise. If the issue hasn’t shown up at your door yet, fret not! Today, we’re providing a breakdown about what really caught our eye and impressed us as we played through the game’s entire first chapter. That September 10 release date is just around the corner, so here’s a taste of what’s looking the most promising.

The Two Worlds Are Full Of Mystery And Conflict

Tales of Arise opens by introducing you to two very different worlds and how they intersect: Rena and Dahna. The technologically advanced Rena has ruled over Dahna for the past 300 years, but it wasn’t always that way. The two once coexisted, with Rena regarded as a paradise and domain for the gods, while the lush Dahna was once believed to be “indestructible” and “everlasting.” Then Rena proved that untrue, using its superior technology to wreak havoc and nearly obliterate Dahna. In an instant, the land’s beauty was stripped, with Rena depleting its natural resources and forcing its inhabitants into slavery.

When Rena conquered Dahna, its leaders split the land into five distinct realms, giving each leader a chance to rule how they saw fit. Tales of Arise’s first chapter focuses on Orbus Calaglia, which is governed by a tyrant named Balseph, the lord of the Fire Master Core. He’s about as big and fiery as you’d expect in appearance, and the barren wasteland he commands is full of scorched terrain, oppressive heat, and dust storms.

Common themes in previous Tales games include nature and coexistence, touching on racism, loss, and societal decline. However, Arise’s opening is a brutal and frightening look at what happens when power and greed get out of hand, as you watch the Dahnan people suffer as slaves under the ruthless oppression of the Renan soldiers. While we learn the basics about these two worlds, it’s clear there’s a complicated history here, and that something needs to change to ensure a better future for all. Bandai Namco keeps a lot under wraps for you to uncover about these two different lands, and I liked feeling like I was constantly piecing together the truth.

Alphen And Shionne’s Relationship Is Intriguing

The two characters at the center of this adventure are Alphen and Shionne, and they could not be more different. Alphen is from Dahna, spending his days as a slave answering to Rena soliders’ harsh demands. He has a strong sense of justice, as depicted in an early scene where he steps in front of a lashing meant for a child not performing up to expectations. This encounter is also where we learn he can’t feel pain.

Shionne’s backstory is a bit more complicated, and she keeps her cards close to her chest about her upbringing and current situation. Where Alphen can’t feel pain, Shionne can only cause it. She has a curse, where anybody who touches her gets engulfed in thorns that electrocute them. Shionne is also from Rena, but based on her being on the run, it’s clear she’s not in good standing there. Her curse and checkered past have left her guarded, and she’s quick to give Alphen a hard time whenever she can. Their relationship is full of banter and putting each other in their places, a bit akin to Aybss’ Luke and Tear, but their opposite lifestyles also bring out different sides of the current turmoil unfolding between the two worlds.

I loved watching this dynamic as you not only learn about the world through their different viewpoints, but you also see both characters come to understand one another and grow. Throughout the story, characters’ identities and beliefs will be tested, and it will be interesting to see how Alphen and Shionne change throughout the adventure.

How you learn new skills has been altered to offer more customization over your characters. Better yet, the new system implements the legacy “Titles” feature. Titles, names that can be assigned to your characters once unlocked by certain game events, have been a part of the series from the beginning, first appearing in Tales of Phantasia on the SNES. Since then, they’ve been used in different ways throughout the series, such as providing special effects or abilities to party members when equipped.

They’re becoming much more meaningful in Tales of Arise by getting tied directly into the progression system. Titles, like “Escape Artist” or “Speedy Chef,” open access to new abilities and stat boosts for characters, which you unlock by investing the skill points you earn and leveling up. Every ability costs a certain amount of skill points, giving you options like gaining new artes like Sonic Thrust, speeding up the charge on a special attack, or KO prevention. Every Title has five different abilities associated with it, and you get a bonus stat boost for unlocking all abilities within one. You can swap between various Titles or focus on one at a time.

“This portion of the game is really designed so that the player can have some freedom in making their own decisions,” director Hirokazu Kagawa told us. “Maybe they’ll have a difficult time deciding, ‘Okay, what’s more optimal?’ ‘What’s good?’ ‘Where should I [focus]?’ And that’s exactly the process that we want people to go through. Whatever choice that they make, it’s designed so that it can fit various play styles. You can really fit it to your liking and still be successful.”

As someone who loves to build characters, this system has me excited for the customization potential. I stopped at the screen many times, contemplating if I should save up my SP for KO prevention so I could withstand a deadly attack or if I should get access to more artes to have better combo options. I even wondered if I should be focusing on just one Title to get the stat bonus, but I kept being swayed by the variety of mixing and matching from a slew of different ones. This system has a lot of potential, but time will tell how far-reaching and satisfying it is. As with many other elements, Bandai Namco is trying new things, and they seem like intelligent innovations.

A big strength of the Tales series is its relationship-building between the party members. Bandai Namco isn’t dialing this back in the slightest. In fact, the development team designs the world map with the characters and places for them to interact in mind. “The center of everything in the world-map design is always the character building and revealing more to the player about the character, whether that’s dialogue, actions, or different activities. So, we always make sure that we can portray the character by building the world around them,” producer Yusuke Tomizawa told us, pointing to various scenic points you can find in the game where characters will react to your actions and the places you’re going.

The series’ ultimate bonding moments, which fans best know as “Skits,” also are returning, but they’re getting an upgrade. Skits are no longer just character portraits with dialogue boxes; now, they feature 3D models in comic-book style interactions, akin to what we saw in Bandai Namco’s recent action/RPG, Scarlet Nexus. The cartoony feel of skits is gone, making them feel much more immersive.

I’m glad to see the emphasis on character interactions hasn’t diminished; if anything, it looks like Bandai Namco has only added in more moments for dialogue between the party. In fact, even in dungeons, Kagawa said to expect more banter and interactions between characters that add comedic relief.

The first chapter takes you to a few different dungeons, but they’re mostly smaller affairs. However, the final dungeon in the first chapter is called Glanymede Castle, and it’s a vast structure that represents the fiery region and the style of its ruthless leader, Balseph. You’re basically running up a colossal tower, trying to locate a key to switch the elevators back on. However, Bandai Namco added some interesting conundrums to keep things interesting.

Blazing walls block certain places, and you can spend CP to melt the flames. This choice creates an interesting dilemma. Do you spend the CP to find better items and equipment, or conserve it since using CP means draining your healing resources?

Kagawa says not every dungeon makes you choose between using CP, but a good portion will. “The idea behind the CP resource is that we really want to make the player think about their choices and formulate strategies,” Kagawa said. “Coming up with a game plan is something that we believe is a very enjoyable and satisfying experience. We’re making the player put their choices on a pendulum or scale. Are you going to use the CP for battle and survivability, or are you going to use it more for exploration and item finding?”

I liked this feature, as the risk and reward part made exploration more enticing. Time will tell if it wears out its welcome after a few dungeons, but I liked having some extra decisions to make in how thorough I wanted to explore. This also got me thinking of what else dungeons will offer to make them memorable beyond the boss fights, leading me to ask about puzzles.

Dungeons in the Tales games have usually had some form of puzzles, whether you’re moving boxes or tapping switches in a particular order, but recent entries have dialed back on those elements. When I asked about puzzles, Kagawa had an interesting answer: “There will be some puzzle elements that might be familiar to you if you played the past entries,” he said. “But we did want to make sure that these puzzles didn’t feel out of place within the overall context of the world. And so we really were careful in designing these puzzles to make sure that they feel realistic and believable and that they’re not completely removed or feel foreign to the world.” Kagawa also confirmed that since Tales of Arise’s characters can swim and jump, the team also incorporated that into some of the puzzle-solving elements of dungeons. Color me intrigued!

Want to see the game in action? Check out our latest New Gameplay Today. You can learn more about Tales of Arise in our latest cover story and discover more about the battle system and enhancements to world exploration in our previous hands-on preview.