The Dungeon of Naheulbeuk: The Amulet of Chaos is Now Available on Xbox One 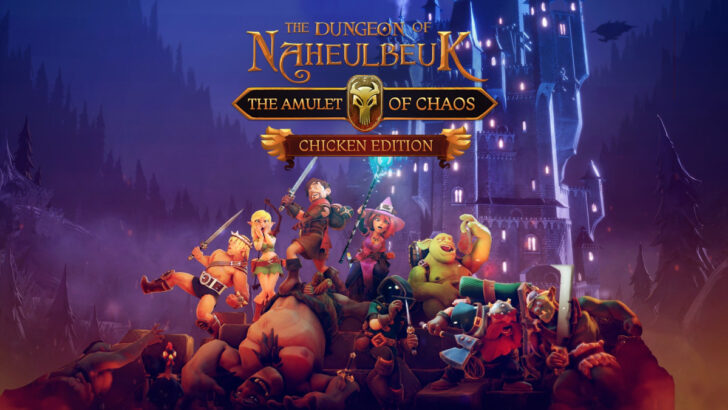 Do you know what happens when a party of less-than-qualified so-called heroes walk into the wackiest of all dungeons, looking for an ugly statuette?

The Dungeon of Naheulbeuk: The Amulet of Chaos. That’s what happens.

Starting today, this epic parody of classic tabletop RPGs is available on Xbox One! Controller in hand, it’s time for you to take the lead of the stupidest adventuring party that you’ve ever seen and, through stroke of genius and sheer dumb luck, guide them to a triumphant victory.

In The Amulet of Chaos, seven stereotypical RPG characters (from the Ranger to the Barbarian, including of course the Elf, the Dwarf and the Wizardess) explore an increasingly weird dungeon. Between evil plots, puzzles, mysteries and time-travelling shenanigans, they somehow manage to obtain powerful items and acquire experience. Although they enter the Dungeon of Naheulbeuk as a bunch of idiots with rusty swords, they are determined to leave it as legendary heroes!

It is up to you to take advantage of their strengths and weaknesses to beat them into shape. You’ll be responsible of every tactical decision they make during the numerous fights they will encounter during their climb of the dungeon; when they level up, you also get to decide which characteristics and skills you decide to upgrade.

Take the Ranger, for instance: depending on the way you level him up, he can a well-versed, polyvalent character, an excellent support for your team, a strong attacker or a fearsome tank that can hold waves of goblins into place! The way you customize your party is almost limitless, and the choice of an eighth character between the three candidates you’ll meet in game makes it even more immersive. Your heroes are yours and yours only!

The fun doesn’t stop there, however! The Amulet of Chaos is a fully voiced adventure, blessed with a stellar cast, like the extremely talented Felicia Day who plays the Wizardess. The hilarious dialogues of these adventurers will definitely get a few good chuckles out of you. Regularly, you’ll even get to decide between several dialogue options that will influence the progression of the story!

Once you reach the end of the main game’s story, you’ll still have the Ruins of Limis to explore – the first DLC of The Amulet of Chaos, included in the console version (the Chicken Edition). Five to eight hours of post-game content spent in a gloomy ruin, caught in a drawn-out conflict between vampires and necromancers!

What are you waiting for, adventurer? It’s your turn, roll initiative!

The Dungeon Of Naheulbeuk: The Amulet Of Chaos – Chicken Edition

They are clumsy, inexperienced and feisty but…they’ll have to endure each other’s company to get the dungeon’s treasure.
However, a feeling of déjà-vu quickly arises…
Guide this team of unlikely heroes in an adventure full of humor and chaos!
The Naheulbeuk universe is an original creation by French author John Lang. It started as a very popular audio comedy series parodying role-playing games and heroic fantasy tropes. Now the story is available in English and as a video game for the first time!

A less than ideal team of heroes
• Play with seven classic role-playing game characters complementing each other’s skills as you level them up: the Ranger, the Elf, the Dwarf, the Barbarian, the Magician, the Ogre and the Thief!
• Every member of the team has their own skill tree to upgrade their abilities and equipment.
• Choose one of three additional companions to join the team on their adventure!

Epic battles
• Exciting turn-based battles, with creative support mechanics between team members.
• An adaptive difficulty system: from an accessible and fun story mode with simplified combat to the “nightmare mode” where the smallest tactical errors will doom you!
• An expansive bestiary (more than 100 enemies!) pushing you to think more tactically with every fight.
• Epic boss battles where you’ll have to muster both strength and smarts to emerge victorious!
• Hidden and destructive objects (including beer kegs) with surprising status effects will turn the tide of battle for the better…or worse!

A dreadful dungeon
• Explore a huge and surprising dungeon from the cave up to the luxury quarters of the evil lord Zangdar, passing through the goblin iceskating park and even an extremely lively tavern!
• Escape traps and solve deadly puzzles to unlock the most impressive treasures!
• Bizarre conversations, absurd situations and unusual encounters await!
• Experience an exciting main storyline and many side quests for your heroes