The Falconeer: Edge of the World DLC Soars to Xbox One, Xbox Series X|S, and Windows PC Today 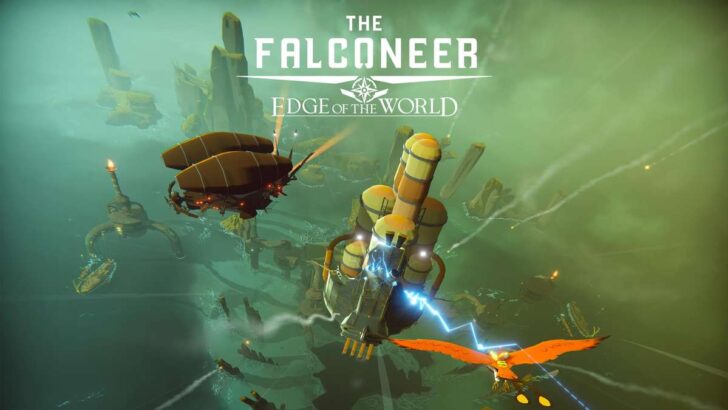 The Falconeer: Edge of the World DLC soars onto Xbox One, Xbox Series X|S, and Windows PC today! For those of you that may be new to the game, The Falconeer is a 3rd person air combat game set in the mysterious oceanic-world of The Great Ursee and is a homage to some of the great air combat games of the past. It is also a BAFTA-nominated game, which as a solo developer, is something I am incredibly proud of.

For those of you who have played the game, perhaps with Xbox Game Pass, and have gone beyond the first chapter, you will have discovered that The Great Ursee is a place filled with intrigue and ancient secrets. Much of the incredible feedback I’ve received over the past year has made clear just how much people love exploring the world of the Ursee, both simply by encountering new locations and by digging into the lore and mysteries that can be found within. So, with the new Edge of the World expansion, I wanted to focus on giving those players something new and interesting to explore. This new content literally expands the map and the world building that goes with it, leading you to spectacular new locations on the periphery of civilization.

There are a number of new side mission chains to be discovered that unlock the new content and locations, but the largest story is one that explores an entirely new faction of people called the Mongres. The Mongres are hinted upon in the base game. You will have been able to spot their trading vessels across the world since the previous update, and of course the Mongres Hunter and their Ormir drake mount is available as an existing DLC already. Now, with the Edge of the World content, players will be able to visit a Mongres Mawspring, a city state beyond the reaches of the imperium, embedded in a literal hole in the ocean, not dissimilar and related to the Maw itself.

The Mongres mawspring is an architecturally distinct location within the Ursee, and its people are fiercely independent, something which of course the rival factions would dearly like to change, especially because of their rich resources in gas and chemistry, valuable to the Imperial war machine.

Here are some tips to help you get into the new content:

Port remit is the starting point for the Mongres storyline, this hive of villainous scum is the Ursee’s trading hub with the Mongres city states, and your starting point. A warning here is that pirates prey on these waters and it is not uncommon for them to make sorties close to Port Remit’s harbour.A Mongres Hunter would be the ideal class, roleplay as a returning son of the Mongres, however the Edge of the World DLC comes with two new classes and unique mounts to try out. The Corsair and their ancient Pteron mount.  And the ancient Arbiter class, judges of the Path and normally tasked with holding each faction to the ancient creed of the Path.The Mongres are naturally allied with the Mancer Order and playing as an Imperial might make the storyline unavailable to you.The Edge of the World introduces a new class of weapons, Imperial Shocklances. These are available at various places for purchase and come as default with the Arbiter class.  This is basically a weapon that fires chain lightning bursts.  These bursts don’t work with aim assist, but the lightning explodes and finds the nearest targets or sub targets.  But beware, they are damaging to friend or foe.The level cap has been raised to 24, if your goal is to be an unyielding master of the skies then the DLC content will reward you with relics of Assula, each one of which will raise your level cap by 1.  You could say you might have a whale of a time acquiring each of these powerful artefacts.

In addition to the new DLC, there will also see the release of a massive new free update for the game, bringing an improved prologue, improved facial animations, lots of new voice acting for existing content, a new diving mechanic, special FX when chants engage, and ships and turrets now using floodlights to search for their targets amongst the clouds, plus loads of other improvements.

Thank you for all your support so far. I hope you enjoy discovering the world of The Falconeer and the new content released today, as much as I enjoyed creating it.

Edge of the World

☆☆☆☆☆
1
★★★★★
$7.99
Get it now
Take on epic new missions, embark on new adventures and discover stories that will lead you to spectacular new locations on the periphery of civilization, in ‘Edge of the World’, an extensive new expansion for this BAFTA nominated game.

☆☆☆☆☆
158
★★★★★
$19.99
Get it now
Xbox One X Enhanced
PC Game Pass
Xbox Game Pass
Generations of poisonous decisions and treason swirl in the deep, as factions collide

Become the Falconeer and soar through the skies aboard a devastatingly powerful Warbird. Uncover secrets lost to the sea as you join or oppose different factions and clans scattered throughout The Great Ursee. Take advantage of multiple Falconeer classes with individual stats, weapons and warbirds that can be upgraded through winning battles, completing quests, discovering secrets, or applying Mutagens or Chants. Use ocean thermals and energy to dive, dodge, barrel-roll, and twist to gain an advantage.

The Falconeer is an open-world air combat game, featuring fast, brutal aerial dogfights and deep exploration of an incredible fantasy open-world set not only above the clouds, but also amongst the waves and down through the sunken, ocean depths.

DESIGNED FROM THE GROUND UP FOR GAMEPAD.