The Great Ace Attorney Chronicles Review – You Know These Methods, And They Still Work 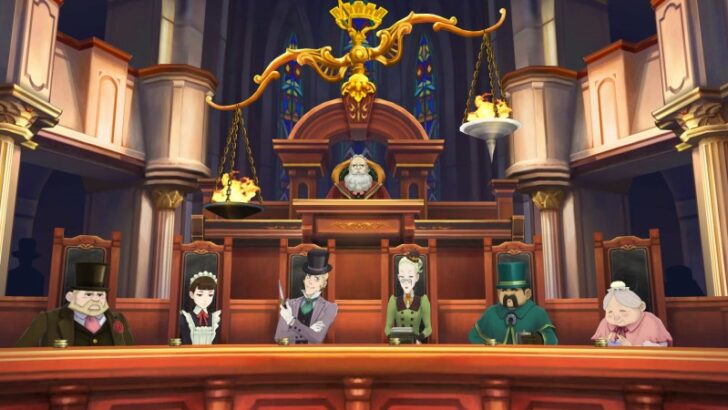 From the zany characters to outrageous courtroom theatrics, the Ace Attorney series has made a name for itself, becoming revered for its offbeat antics and heartwarming moments. Even after finishing the iconic Phoenix Wright trilogy, the franchise has found ways to keep going. Since then, we’ve had new attorneys like Apollo Justice, spin-offs starring Miles Edgeworth, and a crossover with Professor Layton. However, one of the more creative efforts to reboot the formula lies in the Great Ace Attorney series, which transports players to a different time and place: Britain’s Victorian era. Sadly, the Great Ace Attorney’s two entries never made their way Westward until now. Capcom’s The Great Ace Attorney Chronicles includes both games, dual Japanese and English audio, eight “slice of life” escapades, and a new auto-advancing story mode. I couldn’t recommend a better way to experience one of the most over-the-top stories in Ace Attorney history.

Sometimes a change of scenery makes all the difference. The Great Ace Attorney Chronicles ushers players back in time to the turn of the 20th century during Japan’s Meiji Period and Britain’s Victorian, showcasing the culture and standards of both countries. Of course, Chronicles has a huge focus on both legal systems and how their courtrooms function. At this point in history, Britain is increasingly modernizing, and the Japanese are learning a great deal from their methods. However, as we all know, no system is perfect, and each case exposes some of the flaws and corruption at play. This time around, you play Phoenix Wright’s ancestor Ryunosuke Naruhodo, who is just discovering his passion for law. Ryunosuke heads overseas to Britain to learn more, but in true Ace Attorney fashion, everything that can go wrong does, forcing him to step into the courtroom before he’s ready.

Fans will be quick to notice that not only does Ryunosuke fall to the same bad luck as Phoenix Wright, he also uses similar mannerisms. His judicial assistant Susato Mikotoba also channels some major Maya Fey vibes in her unwavering support for Ryunosuke and fangirling over Herlock Sholmes. I enjoyed the familiar overtones in these characters, but they also feel like their own people with personal journeys. For instance, Susasto is a bit more reserved and pensive than Maya and has to hold her own in a time when women weren’t often taken seriously. Spotting the similarities and connections is fun, but you don’t need to play past games to follow The Great Ace Attorney storylines. These are brand-new stories and characters, so this collection is a fine starting point.

As a standalone story, this is one of the most outlandish plots in the Ace Attorney universe. I mean, you team up with the great detective “Herlock Sholmes,” who is just a silly man with barely half a clue about what’s going on. Even with a more comical bent, I like how the narrative doesn’t lose sight of how messy and imperfect the judicial system can be, shedding light on side deals and government interference. However, sometimes the game struggles with its dark humor, making for some uncomfortable moments, such as a character who spits up blood and one who waves a gun near his head, threatening his existence.

Outside of those few instances, the unpredictable mystery and interesting characters kept me engaged; I especially love the overly animated man who loves literature and speaks in haikus. Herlock Sholmes made me shake my head quite a bit, but there’s also something charming about his dense nature. My favorite new character is Iris, a child prodigy who is the true mastermind behind Sholmes’ famed stories. Iris is extremely perceptive and clever, but she also has an endearing innocence that reminds you she’s just a child. I immediately wanted to protect her from life’s darker truths.

I’m glad that Capcom released the two games in a collection because the stories are tightly connected. You get to the end of the first game and notice several hanging threads, and I enjoyed the interesting ways returning characters and events made their way into cases in the second game. Part of the magic is never knowing when, if, or how someone from a past case might find their way back into an investigation. The writing is clever and creative, but the way it’s done in The Great Ace Attorney really shines because you feel in on the joke, quickly realizing there must be a reason the same characters keep showing up.

The bulk of the gameplay revolves around defending clients in the courtroom and investigating crime scenes for evidence. It also involves a lot of dialogue to gather further information. At times, the slow pacing drags, as cases, especially later ones, often require investigating and talking to witnesses at multiple places. At the same time, the trials contain multiple testimonies that often take two to three intermissions. Each case demands a lot of your focus and patience, but once things start to unravel, they’re extremely rewarding, especially as you make connections about what really happened. My favorite moments are when I realize I have the evidence to completely end a witness and expose their lies.

The Great Ace Attorney features some new tactics to keep sleuthing and the courtroom drama more exciting. Herlock Sholmes often jumps to the wrong conclusions in his “Logic and Reasoning Spectaculars,” so you must course-correct his initial deductions about what happened. This requires investigating things more closely, like paying attention to a character’s line of sight to find a clue or seeing the object from a different angle to unearth new information. I like the thought behind this aspect and seeing new revelations come to light, but this was far too easy in the first game, so I never felt too accomplished solving them.

Summation Examination is another new feature, where you pit jury members against each other to expose their flawed thinking and sway them to your side. I like the idea of interacting with the jury and finding ways to make them support my argument, but this is another component that seems better in theory. The inconsistencies you spot are random, and I rarely feel like they make a huge difference in discovering what really happened in the case. Instead of feeling like a fun battle of the wits, these moments seem to prolong cases without having enough startling revelations.

The Great Ace Attorney Chronicles is a solid package, retaining the charm and entertainment of previous entries. It’s not the series’ best, but there’s plenty to keep you entertained as you work your way through case after case. The new scenery and characters made things feel fresh, but playing another Ace Attorney game also felt a bit like coming home.

Summary: The Great Ace Attorney Chronicles delights in its over-the-top fashion and inclusion of a certain famous detective.

Concept: Reboot the Ace Attorney series using Phoenix Wright’s ancestor Ryunosuke Naruhodo as he pursues law at the turn of the 20th century

Graphics: The visuals have improved from their original releases, and the eccentric character designs don’t disappoint. The animated cutscenes are a highlight, so it’s a shame there are so few

Sound: Sound effects and different character themes inject life into the courtroom, but music and voice acting are used sparingly, never having a chance to shine

Playability: As a point-and-click text adventure, the controls are easy to grasp, but the real challenge comes in the courtroom, where you must use your noggin to present fitting evidence and make sound deductions

Entertainment: The Great Ace Attorney Chronicles offers an entertaining package with two closely connected games that delight in their over-the-top fashion and inclusion of a certain famous detective