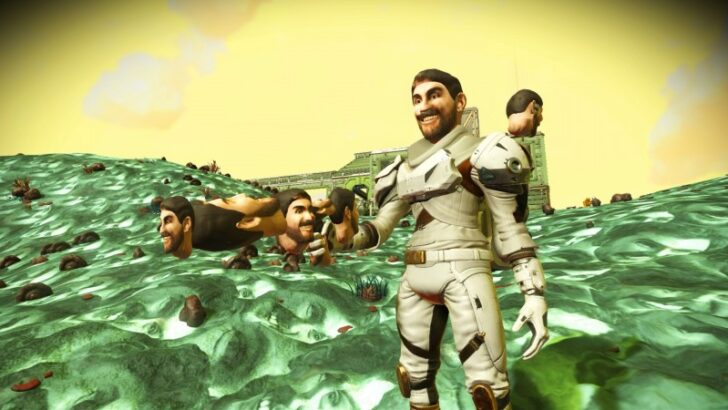 Want some Sean with your No Man’s Sky experience? What about Sean as Sean as a spaceship that looks like Sean? We knew that’d get ya… Now, for those that may be wondering who the heck Sean is, this new No Man’s Sky mod is referencing the man behind No Man’s Sky and Hello Games himself: Sean Murray.

Before anyone takes this mod too seriously, it’s a joke. It basically puts Murray’s head on top of … well, everything. Including the player’s head. Why? Because why not? The world is chaos and this mod is just paying homage to that in the best way possible. You can see even more of this beautiful (horrific) creation in the video at the top of the article, just be warned: the human mind can only handle so much perfection at once.

The mod itself has a pretty hilarious track record too. If you go to the mod’s listing on Nexus, a thread of tweets can be seen with Sean himself and the studio retweeting it, with the creator playfully adding that he will “have the last laugh” regarding the joking protest until the Frontier update arrives. Murray added that some of these textures aren’t used in the game, adding that he will not “negotiate” with the meme mod tyrants. All in jest, but this is the kind of energy we want more of. Sometimes, you just got to laugh and not take things too seriously sometimes, and this mod reminds us to do just that.

While this particular experience was emailed to me a billion and one different times, I do want to give credit to PC Gamer for being the first to write about it. Those are my people in the modding world, and we’re going to go down on this Sean ship if it kills us.

Interested in downloading it? Get this bad boy right here.

So how will you be Seaning up your No Man’s Sean? Sound off with your thoughts on this week’s Mod Corner in the comment section below!