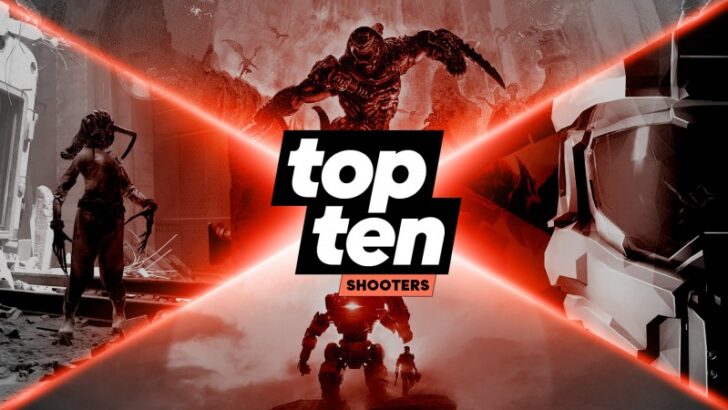 What makes a good shooter? Immediate answers might include punchy phrases/words like “gun feel” or “kit customization.” Even so, it’s hard to define the gratification that comes with securing that coveted victory in ranked multiplayer or surviving a seemingly never-ending onslaught in single-player horde mode. A good shooter tends to contain a smorgasbord of enticing components – gripping atmosphere, weapon/ability balancing, enjoyable arenas, etc. Regardless of style (e.g., FPS, third-person, top-down), the aforementioned features tend to mesh well with polished gameplay, sweeping narratives, and new or improved mechanics. If you feel at home sprinting through multilayered environments, mowing down adversaries with precision and cunning, then the ten games on this list are definitely worth your time and attention.

Splitgate flew under the radar for a long time until it gained traction following a record-shattering 10 million open beta downloads. The energized Halo-Portal hybrid is a true Cinderella story. Developer 1047 games began its gradual rise to prominence in the relative safety of a Stanford University dorm room. We spoke and played with CEO Ian Proulx back in 2019, who voiced his goal of creating an accessible game that was hard to master. Three years later, Splitgate’s nuanced mechanics and arcade aesthetic have piqued the interest of casual gamers and professional esports athletes alike. Season 0 was just announced at Gamescom in light of 1047’s prior decision to indefinitely extend Splitgate’s open beta period. Once the backend is sorted, expect the game’s full launch to follow.

As our very own Dan Tack marvelously put it, “Returnal is a relentless nightmare that’s a dream to play.” A sci-fi horror roguelike, Housemarque’s first third-person shooter drips with eerie tension. The stormy, hallucinogenic planet of Atropos houses serpentine foliage, ancient architecture, and malformed species. You are Selene, an intergalactic explorer marooned in a dangerous world. With a bevy of weapons and discoverable abilities checkered through Atropos’ myriad environments, you’ll trek through unforgiving forests and wastelands to discover the true meaning behind Selene’s reappearing farmstead and the astronaut that haunts her innermost thoughts. In Returnal, death is rebirth. What will you do with each new life?

Modern Warfare fans enjoyed the first Titanfall’s unconventionally speedy gunplay – wall-running, sliding, rappelling. Titanfall 2 introduced a single-player story mode that expounded on the sidelined beats from the first game. You’ll star as rebel amateur pilot Cooper as he blasts his way through the imperial-like IMC army alongside B.T., his straight-laced titan. A catalog of new gear and throwables on the multiplayer front introduced more playstyles to PVP that appealed to various player levels. Titanfall 2 is a beloved title that still boasts a dedicated player base now. Its unparalleled game feel and epic titan-destroying visuals continue to be felt and remembered today. You can see this perfectly demonstrated in the next title on this list.

Apex Legends might not have been the Titanfall 3 fans were looking for, but it proudly wears the series’ lore on its sleeve. Plenty of battle royales have been fighting for Twitch supremacy, and Apex is no pushover. 18 legends, constant event/cosmetic updates, fluid physics, and tight gunplay have placed the popular FPS in a league of its own. Additionally, revolutionary mechanics like the ping system and respawn beacon have influenced future and classic titles in the genre. In its tenth season, Apex Legends continues to garner success with additional characters and detailed map changes. A new game mode called Arenas converts the large-scale action into tense 3v3 bite-sized duels, echoing creative director Chad Grenier’s goals for expanding beyond the battle royale formula.

Sure, Plunder – a cash-hoarding game mode with immediate respawns – is a nice addition to Warzone, but the battle royale experience really steals the show. Simply put, Warzone is bigger than its contemporaries. With 150 players in a given match (sometimes even 200), death-defying countermeasures with the implementation of Gulag duels and purchasable respawns, and in-game side objectives like bounties, you’re guaranteed long bouts of action despite the large maps. A bevy of different player-count playlists – Solos, Duos, Trios, and Quads – mean that you can drop into the battlefield with or without a dedicated squad whenever you like. Like other live-service shooters on this list, content rollouts will likely keep you planted in your seat for hundreds of hours to come.

As the partially-remastered culmination of the most iconic space opera adventure on Xbox, Halo: The Master Chief Collection is a must-own. Whether you’re an existing fan or a newcomer, Chief’s extensive odyssey is so accessible because of its streamlined mechanics (even Combat Evolved looks and feels solid!), unforgettable music, and continuous narrative. Bungie passed the baton to 343 Industries many years ago. The critical reception hasn’t been consistent since the stellar Halo 4. Still, Infinite looks to push the classic franchise in a new direction with a huge open world and an evolving, multiplayer-based story. The Master Chief Collection, then, is the perfect primer.

Doom Slayer (or Doomguy) and Master Chief are practically synonymous … except the former has a penchant for ripping demons to shreds and bathing in their innards. We loved Doom Eternal’s no-holds-barred, close-quarter combat – shotgun rounds give way to exposed rib cages and chainsaws literally eviscerate adversaries into blood-glazed chunks. Overwhelming enemy numbers help pace the action in increasingly frenetic ways; you’ll have to keep rotating around each arena to avoid pesky bottlenecks or death. Let’s also not forget about that heart-pumping soundtrack. Mick Gordon’s “ancient, alien” heavy metal soundscape ties the entire high-octane experience together with haunting guitar riffs and evocative basslines that match Doomguy’s sporadic heartbeat.

And for the five of you who have next-gen consoles, an upgraded version of Doom Eternal is also available.

Can Bungie do no wrong? Destiny 2 soars above the successes of its prequel. An impressive number of expansions makes the live-service blockbuster infinitely replayable, and intricate lore lies just beneath the surface of its central plot. As a Hunter, Warlock, or Titan, you’ll take to the stars to combat an evil force as old as the universe itself. Hundreds of weapons are at your disposal, and high difficulty strikes/nightfall missions can reward you with high-powered gear. But, for now, let’s pivot to raids – Destiny’s quintessential cooperative PVE mode. Raids push your mechanical, communication, and reasoning skills to the test. Failure waits beyond each checkpoint; each seemingly small-scale shootout. The mysterious Lightfall expansion, slated for 2022, is slated to usher in a new era for the loot-shooter.

The latest Rainbow Six is a callback to methodical FPS titles like Counter-Strike and SOCOM. Claustrophobic maps laden with murder holes, punishing time-to-kill ratios, and intuitive sound effects heighten the tension of each match. Sure, you can rush into a defense point, guns-blazing, as if Siege were your average twitch shooter, but consistent success comes from unwavering patience and holding angles. An ever-growing roster of playable operators – each equipped with ability kits and preferred firearms – means that the metagame is constantly fluctuating. However, if you prefer the frenetic firefights of Warzone or Apex, Siege might not be for you. Even so, it remains one of the most consistent competitive shooters out there.

Extraction, Siege’s alien-infested story-mode counterpart, is set for a 2022 release and will likely showcase the same mechanical polish as its predecessor.

Alyx Vance and her alien-infested quest can’t be ignored. The prequel to Half-Life 2 showcased the potential of VR technology. Literally ducking incoming bullets and other dangerous projectiles or doing simple actions like reloading or interacting with environmental objects built immersion in ways that controller or mouse and keyboard can’t emulate. It’s unfortunate that Half-Life: Alyx can only be played with VR equipment, making it one of the most exclusive games on this list. Nevertheless, Valve’s newfound commitment to its most beloved franchise might mean that more Half-Life games are on the horizon. It’s only a matter of time before the enigmatic G-Man graces our screens once again.

Are there any games that you’d add or replace? And if you’re interested in these genre lists, check out our https://www.gameinformer.com/2021/08/26/top-10-action-games-to-play-rig…; target=”_blank”>Top 10 Action Games To Play Right Now.