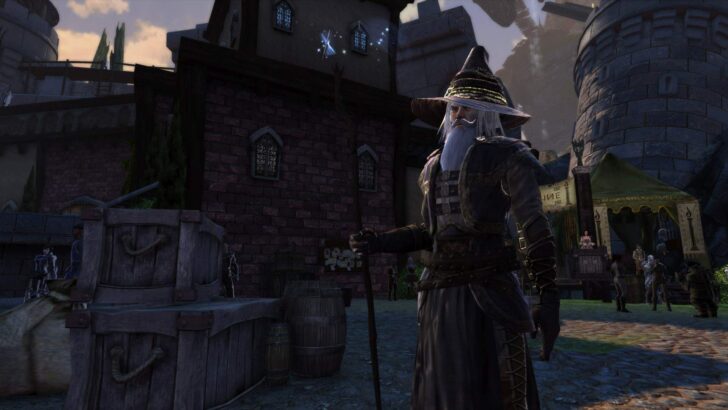 A dark omen lingers on the horizon in Neverwinter’s newest battle pass campaign, Echoes of Prophecy. Someone or something has torn a hole in the Weave, the very source of the magic that flows through the world of Toril. As unrecognized faces begin filling the streets of Protector’s Enclave, the exalted Sage of Shadowdale, Elminster, sends out a summons for the valorous heroes of Neverwinter to aid him in an investigation. Adventurers are needed to identify the villainous forces behind the unraveling Weave and help protect the Sword Coast from certain calamity.

A Call to Arms

Adventurers of any level can join in Elminster’s call to arms when the first of three battle pass campaign milestones, A Tear in the Weave, goes live on October 1.

Each battle pass milestone release tantalizes players with compelling stories, unique questlines, and repeatable challenges. By participating in each milestone, players can earn battle pass campaign currency which can be exchanged for a host of compelling rewards sure to enhance their Neverwinter experience!

The first milestone release kicks off with Elminster Aumar, who can be found in the hub of Protector’s Enclave starting October 1st. The first milestone will be available through the whole of October, with future battle pass campaign milestones releasing automatically over time.

Each release will feature a unique set of rewards which include the following:

Milestone I: A Tear in the Weave

Milestone III: Of Dragons and Influence

Players can earn battle pass campaign currency by completing quests from Elminster or undertaking Weekly Legacy Quests. Additional currency can be obtained by players level 5 and up by joining in Daily Random Queues. An optional Echoes of Prophecy Battle Pass can be purchased throughout the duration of the three milestone releases, providing players with a chance to earn extra items or any coveted battle pass milestone rewards they may have missed along the way.

We are excited to have you join us for this limited-time event which sets the stage for a riveting new story coming to the world of Neverwinter in the near future. Ready your arms, and we’ll see you in Protector’s Enclave this October!

☆☆☆☆☆
1040
★★★★★
Get it now
Neverwinter is the premier Dungeons & Dragons MMORPG experience, featuring fast-paced combat and epic dungeons. Explore the vast city of Neverwinter and its surrounding regions, battle its many enemies, and be a part of Forgotten Realms history.

Experience Dungeons & Dragons Like Never Before – Neverwinter is an action MMORPG that bridges intense combat with classic D&D gameplay. Journey through the city of Neverwinter and the legendary subcontinent of Faerûn, and face off against the greatest adversaries from D&D legend.

Build Your Own Legend – Bring your adventures to life through iconic D&D classes and races, advanced paragon paths, companions, and a remarkable range of customization options. Whether you’re hunting dragons and beholders within crumbling dungeons or battling other players in the icy reaches of Icespire Peak, you’ll discover why Neverwinter is the definitive Dungeons & Dragons experience.

Optimized for Xbox One – Neverwinter inspires classic Dungeons & Dragons adventures with a fully optimized player experience for Xbox One. The fast-paced action gameplay of Neverwinter has been mapped to the Xbox One controller, giving adventures the ability to move around the battlefield and cast powerful spells with ease. Xbox One players can also use their Xbox One friends list to find and party up with others as they explore iconic locations of the Dungeons & Dragons universe.