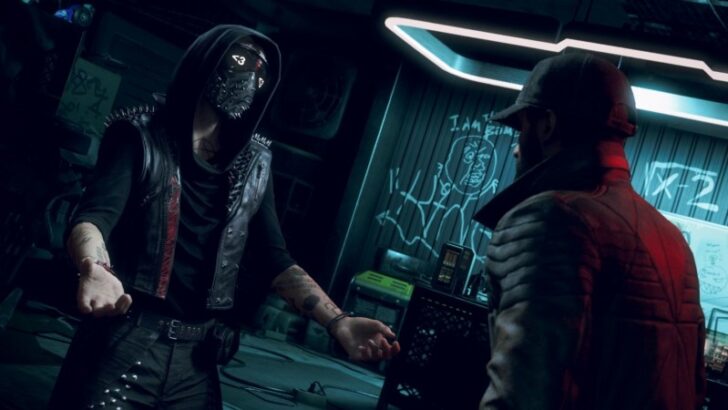 Watch Dogs Legion took the hacker franchise in a completely different direction, eschewing a traditional protagonist in favor of a thousand playable faces. While unique and enjoyable, I was left wanting a deeper connection to the playable characters that I grew alongside throughout the story. The Bloodline DLC delivers this by bringing back the original hacker himself: Aiden Pearce. And he brings nearly everything I wanted from the base Legion experience along for the ride.

Bloodline sees the return of the original Watch Dogs protagonist, but now he’s older, a little wiser, and out of “the biz.” Until he’s drawn back in with the allure of supporting his nephew, Jackson, who is Aiden’s sister’s son that we met in the first game. Bloodline also brought back another familiar face – or more appropriately, a familiar mask – with Watch Dogs 2’s Wrench.

The story begins with Aiden reluctantly taking a dangerous job in London. He sees a chance to reconnect with his nephew, so he dives back into the life he left behind. However, during a mission, Aiden soon comes across evidence that another hacker has beaten him to the punch, a hacker we later learn is Wrench. The two don’t have a solid start, but the narrative intertwines the pair’s experience so they are both playable, which makes their continued growth believable and enjoyable. From Aiden chasing Wrench through an infiltrated building to Wrench looking out for Aiden’s safety when the danger hits a little too close to home, Bloodline delivered a robust story in a way that Legion did not.

Aiden and Wrench’s chemistry is more than just how they interact, it involves how their skills and abilities play off of each other. For example, Aiden’s Focus, which allows him to slow time to line up the perfect shot, is the perfect antithesis to Wrench’s Ninja Balls secondary ability, which essentially means he can throw flashbangs. Aiden represents balance and responsibility, whereas Wrench is an ironic blend of shy-chaos and freedom. That chemistry made their interactions engaging and important, it also made progressing through each mission a joy just to see how they continued to interact.

I appreciate getting to see the older versions of characters from the previous games. For example, Jackson has grown up since meeting him in the first game, and his reunion with Aiden makes it immediately evident that he has paved his own way into adulthood away from the tragedy of his sister’s death and his mother’s kidnapping in Watch Dogs 1. Jackson’s fight against everything Aiden represents, everything Aiden wants to offer also provides a heartbreakingly human connection that means more than just the paycheck at the end of a mission. As a result, Bloodline gives Aiden a meaningful redemptive arc and much-needed closure, helping him confront the guilt that comes with the choices he made in the first game.

Bloodline offers 12 main storyline missions and side quests, and the entire DLC can be completed within six to eight hours. It pares down Legion’s large playspace, focusing on a more contained section of London in order to deliver a set of new streamlined quests. And don’t worry about remembering to do the side quests or not: During Bloodline, you’ll have to meander off to do the lower priority missions before progressing in the main story, so there is no way to forget to do the additional quests.

Stealth and patience remain at the epicenter of the action with Legion’s gear mechanics. Most of the tools in Aiden and Wrench’s belts should be familiar to Watch Dogs fans, like Aiden’s Gunslinger ability that buffs his damage and Wrench’s beloved Shredder Senpai LMG. Both Aiden and Wrench’s weapons and abilities have received a few modifications, including Wrench’s cloaking technology and his mission to steal a device called the Broca Bridge from Thomas Rempart, CEO of Rempart Automated Defense Systems. Aiden’s System Crash also elevates his hacking abilities, which are helpful during recon missions, especially his Profiler weapon; a tool that allows Aiden to hack into anything connected to the Blume Corporation’s ct0S such as personal information, data files, and more. The Profiler has some upgrades, including more ways to jam communications, provide distractions, and command rolling blackouts. The Bloodline upgrades were enjoyable and made strategizing during certain infiltration missions more efficient and feel more well thought out – even if I caused an accidental blackout a time or two by selecting the wrong option in the selection wheel.

Upgrading these dual protagonists is doable through the main mission and side storylines, though don’t expect any wild character and gear advancement as seen with Legion’s characters. Bloodline is a story-focused DLC that continues Legion’s narrative, therefore the overall game mechanics are the same as the base game. For those jumping right into Bloodline without first diving into Legion, Ubisoft does an efficient job acquainting players with the game’s basic controls and how maneuvering through this world works. The simplification of character progression allows players to return to Legion to take on the Bloodline story without feeling weighed down by an additional drudging grind. Massively scaled upgrade paths are largely unnecessary since both of these protagonists are already established and powerful from the previous games.

Overall, the latest DLC for Legion offers satisfying closure for both Aiden and Wrench. This story DLC shows players how much each protagonist has grown since their time in their respective games. The growth of both characters is abundantly clear through the Bloodline storyline and how both leading characters react to the world around them. If you’re a fan of the previous Watch Dogs games, Bloodline is a must-play. I’d even go so far as to say I enjoyed it more than Legion.

Summary: The Bloodline DLC delivers this by bringing back the original hacker himself: Aiden Pearce. And he brings nearly everything I wanted from the base Legion experience along for the ride.

Concept: Aiden travels to London to take on a new job in hopes of reuniting with his estranged nephew, Jackson

Graphics: Bloodline looks like Legion, including a heavy police force and a futuristic setting conveyed through lights and bright colors

Sound: Unlike Legion, passing NPCs don’t produce a chaos of voices, but a focus on strong narrative voice acting is amplified by the DLC’s strong soundtrack

Playability: Bloodline is more focused narratively, giving the DLC less replayability than Legion but with the potential to see more of London through Aiden’s eyes

Entertainment: Bloodline ties all three Watch Dogs games together in a satisfying and meaningful way