We Have a Bloody Good Time with Back 4 Blood 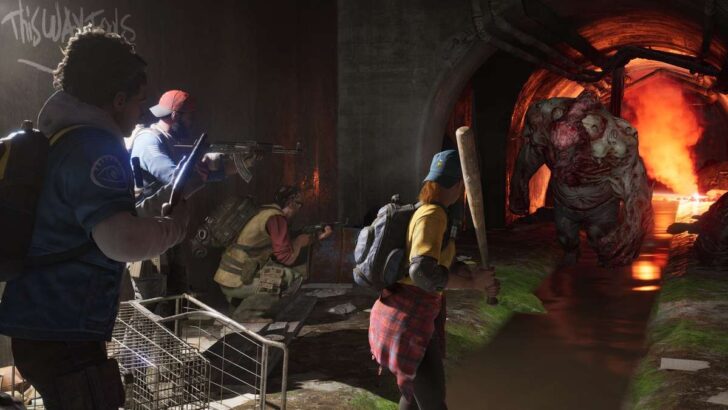 We go hands-on with the thrilling co-op first-person shooter from the creators of the acclaimed Left 4 Dead franchise.The Back 4 Blood open beta starts today for those who have pre-ordered the game.Back 4 Blood launches October 12 for Xbox One and Xbox Series X|S and will be available day one with Xbox Game Pass.

We were covered in blood less than a minute after stepping out of the Safe House; turns out there were a ton of Ridden waiting for us just outside the door. Then, after a burst of gunfire and laughter, we turned to look at each other to see how absolutely covered in gunk we were as the lifeless bodies of Ridden were scattered about the place.

This brief firefight was but a sampling of Back 4 Blood’s multiplayer mayhem that was in store for us, a session that featured numerous hectic firefights, tons of loot, a gigantic undead ogre, puss-filled sacks that had to be popped, pesky crows, and many, many zombies. It was everything we were looking for (and more) from a spiritual successor to one of the all-time great co-op multiplayer shooters.

Suffice to say, the blood in Back 4 Blood is very deserving, as are the comparisons to Left 4 Dead and its excellent sequel Left 4 Dead 2, which makes sense given that Turtle Rock Studios is comprised of developers from those games – and they haven’t shied away from this fact in their promo materials. Everything we’ve played so far feels like a natural evolution to those games, from the loot drops to the variety of weapons and the expansive level design, making this feel both familiar and new. Kinda like riding a bike… through a zombie apocalypse.

One of unique mechanics that will add a ton of replay value is Back 4 Blood’s Card System, where you’ll assemble a deck from a variety of unlockable cards through gameplay that you can equip to your character to provide a variety of boosts or stat modifiers.

It felt a little daunting at first to understand – we just wanted to jump in and start shooting zombies – but after a few mid-mission breaks at Safe Houses, it gave us a chance to better understand the hands we were dealt, and how best to apply them to our team.

For example, cards like Sunder will cause targets to take 20% increased damage for five seconds, Durable gives a slight bonus to Trauma Resistance, and Combat Knife turns your Bash ability into a knife that counts as a melee weapon. There are a ton of cards for you to unlock and shuffle through to create your optimum deck (15 cards per).

Then in-game, you’ll be dealt a set of random cards from your deck to play. It’s a very deep system, one that we barely had enough time to scratch the surface on during our gameplay session, but it’s easy to see the potential this Card System can have on the game’s replay factor.

During our co-op campaign session, we played through a majority of Act 1 across a great variety of levels, two of which really stuck out to me: The Crossing and Hell’s Bells. That’s not to say the other levels didn’t provide a great mix of hectic gunplay and challenging objectives – they very much did — but The Crossing featured such an epic end-level scenario, where we had a near-impossible objective navigating a container ship, that led to defending a checkpoint from an onrush of Ridden on a bridge felt spectacular.

Then in Hell’s Bells, after moving through layers of thick fog — which kept all of us on edge throughout the level — it all culminated in the defense of an old church where we had to work on boarding up the windows while keeping the Ridden at bay, just long enough for us to clear out the church and survive to see another day. And all of this was just in Act 1! I can’t wait to see and play what else is in store at release.

Get Rid of Them

The Ridden we’ve encountered so far each bring a unique trait to the gunplay that keeps everyone on their toes, like the lumbering Tallboy that swings a massive club-like arm, the massive Reeker who can explode on death covering those around them in sticky pus, or the Stinger who can ping you with phlegm, all help to keep the gameplay moving at a brisk pace.

Then there’s your masses of basic grunts that continue to swarm you every chance they get, especially when you reach some mid-tier objectives that will create a lot of noise, like turning on a tow truck to help clear the way, which causes them to come rushing at you – or if you happen to disturb a flock of crows feasting on the undead (don’t do it).

We even encountered a massive Ridden ogre – I didn’t catch its name – that sprung out of the ground but picture the Cave Troll from “Lord of the Rings: Fellowship of the Ring” and you get the idea. Except this one could generate massive boulders of blood and throw them at you causing some massive AOE damage to you and your group.

It’s not just The Ridden or the Card System that can bring a tremendous amount of replay value to Back 4 Blood. The Cleaners – the characters you can pick to play as – each possess their own unique set of perks to help the group. Like Mom, who can Instant Revive, or Hoffman (serious Walter Sobchak vibes) who can spawn ammo with kills, or Doc who can heal low health teammates without items. In total there’s eight Cleaners to learn to play and that helps bring a tremendous amount of depth to an already in-depth multiplayer zombie shooter.

On top of that, there’s over 20 weapons in the game that are a mix of assault rifles, sub-machine guns, shotguns, pistols, and some fun melee weapons like a fire axe, spiked bat, and machete. For the guns, there’s also a variety of attachments that vary in rarity from common to legendary that you equip to improve such stats as handling, accuracy, range, firepower, and mobility.  Sifting through some of the mid-mission loot crates harkens to Diablo as I pick and choose which attachments to use with the MP5 I grew quite partial to during my session.

Best of all, starting today, early access to the Back 4 Blood open beta has kicked off featuring both the co-op experience we played through during our session, and the player-versus-player (PvP) mode which we were not able to check out. The open beta also features the all-new PvP mode, Swarm, where two squads of four face off in a best-of-three series of rounds, swapping between the Cleaners and the Ridden. You can choose from five Cleaners to fight off the Ridden with your friends or play as six different Ridden variants while checking out a variety weapons along the way.

The open beta begins with an early access portion starting today, August 5, and running through to August 9 for those who pre-order Back 4 Blood on the Xbox Store. Players can also register at Back4Blood.com/Beta for a chance to get into the early access portion. The open beta will continue next week from August 12 to 16 for all players. Both open beta portions will be playable on Xbox One and Xbox Series X|S with cross-play and cross-gen support.

Everything we’ve played so far has us extremely excited for the full release of Back 4 Blood on October 12 with Xbox Game Pass. We’ll have more to share about this awesome zombie multiplayer shooter in the weeks ahead, so keep it tuned here to Xbox Wire.

Back 4 Blood is a thrilling cooperative first-person shooter from the creators of the critically acclaimed Left 4 Dead franchise. You are at the center of a war against the Ridden. These once-human hosts of a deadly parasite have turned into terrifying creatures bent on devouring what remains of civilization. With humanity’s extinction on the line, it’s up to you and your friends to take the fight to the enemy, eradicate the Ridden, and reclaim the world.

Fight your way through a dynamic, perilous world in a 4-player co-op story campaign where you must work together to survive increasingly challenging missions. Play with up to 3 of your friends online or go solo and lead your team in battle.

Choose from 8 customizable Cleaners, one of the immune survivors, and a range of lethal weapons and items. Strategize against an ever-evolving enemy bent on your total destruction.

Play with or against friends in PVP. Switch between playing as a Cleaner with special perks and the horrific Ridden. Both sides come with unique weapons, abilities, and specialties.

A new “rogue-lite” Card System creates different experiences each and every time, putting you in control to craft custom builds and undertake more demanding fights.