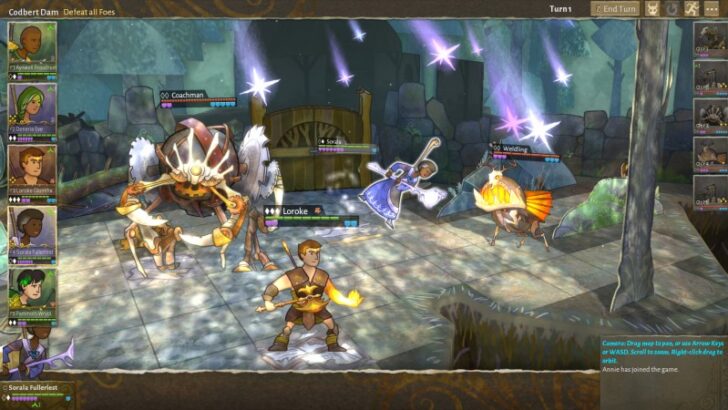 In a nutshell, Wildermyth is a fantasy tabletop tactics game that can be played in a few hours or for as long as you like. You have access to multiple campaigns that offer different challenges and lengths – ranging anywhere from four hours to many, many more. During these adventures, you gear up a team, make decisions that affect how the stories play out and vanquish hordes of dangerous enemies in various turn-based combat setups. While each campaign is self-contained, you can pull characters you develop into subsequent campaigns with all their stats, allowing you to assemble a legendary roster over time.

You can take Wildermyth’s three core classes in a variety of interesting directions. The most curious and original is Wildermyth’s take on the classic caster or mage, which manipulates various objects across the combat grid, twisting them to their advantage. This means you can light objects on fire, fling boulders, heal/buff your friends, and more by forging connections to bookcases, braziers, and anything else laying around. Classic warrior and hunter archetypes are also available, and I loved forming various compositions fueled by poison attacks on ranged-archer team compositions. While the base classes may be archetypes, there are enough different directions to take them with progression mechanics in order to keep things compelling.

While you drastically alter how each core class plays via gear and level up skills, one of the biggest charms of Wildermyth is how the story dictates gameplay. Over the course of any campaign, your characters interact with each other and the world around them in comic book-style sequences. You make choices in these stories that determine relationships and a whole lot more. For example, perhaps one character begins to transform into a wolf, and you choose to fully embrace it. What starts with a small head change, over time, may result in a full character alteration that affects that character’s stats and abilities.

I took one of my prized archers through this development, and as a result, she could no longer hold or shoot her bows – but she could rend enemies with a flurry of claws. These procedural stories can transform your characters in many ways that have permanent and significant effects, and you’ll need to account for these changes from battle to battle. Maybe you find a duck pet that gives stats, or two party members become rivals. While the combat is solid, these frequent story vignettes are absolutely the highlight of Wildermyth and make every campaign a treat as you make choices that change the story and your characters forever.

Most encounters boil down to figuring out how to strategically position and eliminate opponents, which is fun at its core. This stays interesting over the course of a run even though you may engage in a ton of fights because your characters are constantly changing if you let them. Maybe you have allies who become possessed by a dark spirit or you gave your tank a giant golem fist that changes their attack style. Things change, things happen, and it’s way more impactful than just picking inconsequential options from a dialogue tree – the story flows into the combat in a great way, and by the end of a campaign you’ll likely have several characters you adore, for all their struggles and triumphs.

The overworld system is probably the weakest aspect of Wildermyth. Here you manage resource collecting and enemy invasions as your territory holdings expand over the course of a campaign. What this really amounts to is a bunch of busy work that’s easy to ignore as you try to push through the more interesting content. As fun as the core combat is, these additional battles bog down some campaigns with too much fighting.

If you’ve always wanted a fantasy Dungeons & Dragons stylized XCOM game, Wildermyth might be exactly what you’re looking for. Designing a game around randomized storytelling is tricky, but Worldwalker pulls this off with gusto and gravitas.

Summary: Story, style, and strategy come together in one whimsical package.

Concept: Pilot a team of adventurers through various stories and campaigns that feel like tabletop adventures

Graphics: The pop-up storybook fantasy look is enchanting and conveys a lighthearted feel

Playability: Because of the options available and the winding story, Wildermyth may be a bit overwhelming at first. Playing the introductory campaign is advised, and the difficulty is adjustable

Entertainment: Wildermyth expertly gives players stories to explore with choices that have a significant impact on gameplay. If you like tactics games or tabletop roleplaying, Wildermyth is not to be missed.