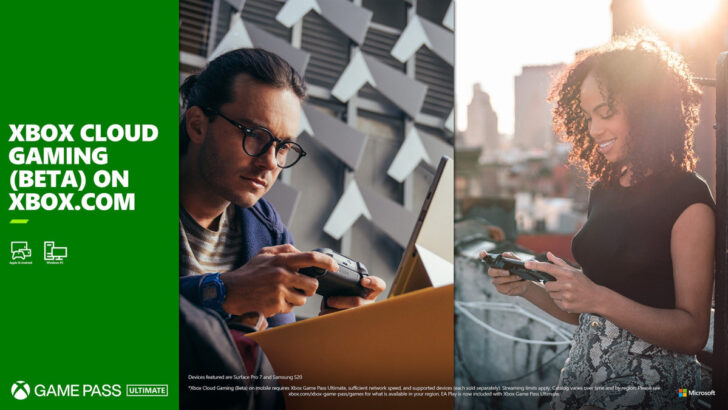 At Xbox, our mission is simple: bring the joy and community of gaming to everyone on the planet. To achieve that, we aspire to empower everyone to play the games you want, with the people you want, anywhere you want.

We are creating a future that combines the gaming heritage of Xbox and the power of Azure. A future where we bring high fidelity, immersive games to the 3 billion players around the world. Now we’re taking a big step forward to reaching that vision: Starting today, Xbox Cloud Gaming is available to all Xbox Game Pass Ultimate members with Windows 10 PCs and Apple phones and tablets, via browser, across 22 countries. If you’re a member or want to become a member, simply go to xbox.com/play on Microsoft Edge, Chrome, or Safari on your PC or mobile device to start playing hundreds of games from the Xbox Game Pass library.

With billions of active Windows 10 PCs, iOS devices and Android phones, we want you to have new opportunities to play the deepest, most immersive games whenever and wherever you choose. Simply put, we’re bringing the Xbox experience directly to the devices you use most.

We’re also making significant improvements to the overall experience: Xbox Cloud Gaming is now powered by custom Xbox Series X hardware. We’ve been upgrading Microsoft datacenters around the globe with the fastest, most powerful Xbox hardware to give you faster load times, improved frame rates, and an experience of a new generation of gaming. To ensure the lowest latency, highest quality experience across the broadest set of devices, we will be streaming at 1080p and up to 60fps. Going forward we’ll continue to innovate and add more features to enhance your cloud gaming experience.

Cloud gaming provides seamless play across your devices. When you’re streaming games on a PC or mobile device, your game is playing from Xbox hardware in a Microsoft datacenter. This means you can jump into a game, connect with your friends, and play through the Xbox network just as you’ve always done. That’s right, your game saves are just the same wherever and whenever you play, so you can pick right back up from where you left off.

So grab your PC and stream Outriders or Doom on your iPad using your saved game. Or, when you have a free half-hour, you can fire up xbox.com/play and get a game in on MLB The Show 21.

As we bring games to more devices, we’re also evolving how you can play your games. Today about one-in-six players who play from the cloud are exclusively using custom touch controls that are enabled for more than 50 games – one I personally love is Minecraft Dungeons. And of course, you can also play games from the cloud using a compatible Xbox Wireless Controller, or one of the many supported controllers and mobile gaming accessories, including the all-new Backbone One for iOS.

Today marks a key milestone in our journey to bring the Xbox experience to all gamers, and we can’t wait for you to begin playing. I remember about three years ago, the first time I picked up a phone and played a cloud game, using nothing but touch controls. It’s a moment I’ll never forget, where the beauty of the graphics mixed with the creativity of technology to create something truly magical. So, from Team Xbox to you, we hope you experience more joy and connection through gaming anywhere and everywhere.