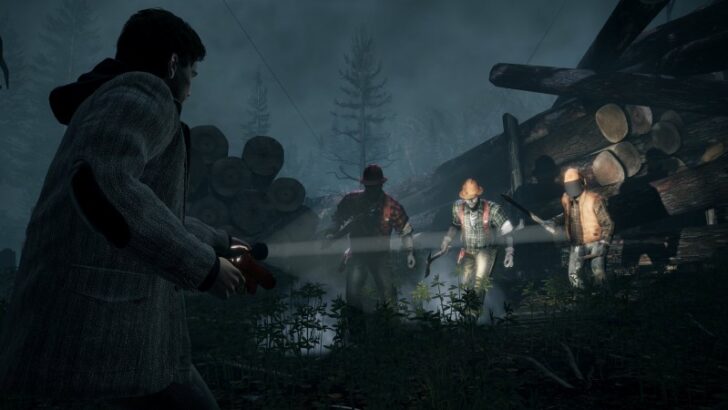 We need more games like Alan Wake – a horror experience that scares you, but not in the ways we often see. It has many of the genre’s trappings like carefully placed jump scares, ax-wielding murders lurking in the shadows, and unsightly supernatural threats, but the true terror comes from words written on pieces of paper and thoughts expressed by protagonist Alan Wake.

Alan is a writer lost in his stories, and it’s up to the player to figure out what’s real and what’s a fabrication. Many of the words you read foreshadow terrible fates or show how Alan is spiraling into an abyss. The strong narrative pulse makes this 11-year old game feel somewhat timeless, even with gameplay showing some rust.

Alan’s story boils with intensity from the moment you meet him, trapped in a strange nightmare that leads him to a lighthouse. The story draws heavy inspiration from the many works of Stephen King and David Lynch’s Twin Peaks and is open to interpretation. My understanding of what happens is likely radically different from yours – making it a hell of a game to discuss.

The entire story unfolds in the small Washington port town of Bright Falls – a place Alan and his beloved wife Alice travel to try to help Alan find his writing pulse again. The city is obsessed with Alan. Standees of him holding his latest book are scattered about in the oddest of places, a visual cue that all is not as it seems. That feeling of not being able to trust your eyes or even Alan’s actions hold the narrative in a tense and highly entertaining state for most of the journey. An early sequence where Alan dives into a lake is an excellent example of the narrative’s dramatic shifts: The second his hands hit the water, he awakens in his car, blood dripping from his forehead. What happened here? Which moment is a dream? Thoughts like these flare up through most of this dark tale.

This Remedy Entertainment production looked great back in the day, and it still looks good today, but the remaster efforts aren’t enough to fully hide the game’s Xbox 360 roots. The world and character models are subtly touched up to deliver smaller details and a little more realism. The crisp 4K resolution makes the dimly lit woods more terrifying and shines a spotlight on some of the aged qualities, like facial animations that don’t always line up with a character’s emotion or Alan’s movements, which are a little too mechanical and exaggerated. The game looks antiquated, but not in a bad way. It has an eerie (yet believable) quality that matches the story’s dark tone.

Even with Alan being a little squirrely and a horrible jumper, he’s still good fun to control. Using a flashlight’s beam to remove the darkness from an enraged being is surprisingly intense, given how quickly the battery dies. I enjoyed the challenge that comes in keeping the beam on the target long enough to stun them and make them vulnerable to bullets. A nicely designed evasive maneuver adds some strategy to the mix and allows Alan to separate himself from packs of enemies or more formidable chainsaw-wielding foes.

Some frustration comes from the lack of visibility during conflicts. I wasn’t aware of a second or third enemy in some conflicts until they took a swipe at me. Thankfully, Alan has plenty of health to regain command of the situation. And he isn’t combating only humans or even living things. Barrels and angry, possessed farm equipment try to crush him. They add variety to the gameplay but are unintentionally comical in design. Beware the tractor!

I loved collecting manuscripts that hold essential plot points and stopping to watch a live-action episode of Night Springs. Again, the story pulls you in directions you don’t usually see. Even the world does a great job of conveying story moments, like wind howling menacingly through the woods and destructibility being used to frame Alan’s breaking points or seismic narrative shifts.

Sightseeing is rewarding, but I don’t understand the push to collect 100 coffee thermoses other than to hammer home the theme of “awake.” It’s a strange collectible in a game that focuses intently on story and gameplay flow.

After the credits roll on this excellent story – give yourself a few days before jumping into the DLC. Dream up theories about Alan’s fate, discuss them with friends, and then see where Remedy takes the tale in The Signal, a short, new DLC chapter that turns the narrative on its head again. You can then jump right into The Writer, the final act for this first game that provides closure for some story threads.

Remedy also provides a great reason to play the game again through two dev-team commentary tracks. You can turn these commentaries on at any time, and they provide fun insight into the design decisions and the making of Alan Wake. One of the tracks is brand new and features reflective thoughts from the game’s writer and director, Sam Lake.

Remedy’s latest game, Control, sets up a hell of a scenario for an Alan Wake sequel. It would be a shame if we didn’t get it, especially after reliving this classic game. It holds up well and shows us just how strong Remedy is as a storyteller.

Summary: While not dazzling as a remaster, the core Alan Wake experience still shines bright.

Concept: A horror mystery that has lost little of its narrative bite. The gameplay shows its age, but the story keeps the game exciting

Sound: Alan’s narration is exceptional and Barry is as charming as ever. Sam Lake’s bonus commentary track speaks to Alan Wake’s place in history and some of the thinking that went into Control

Playability: Pointing a light at violent people is surprisingly fun and holds up well today, even with some encounters delivering frustration

Entertainment: Well worth revisiting over a decade later to see how your theories hold up. This is a great game to discuss with friends – a book-club experience for gamers