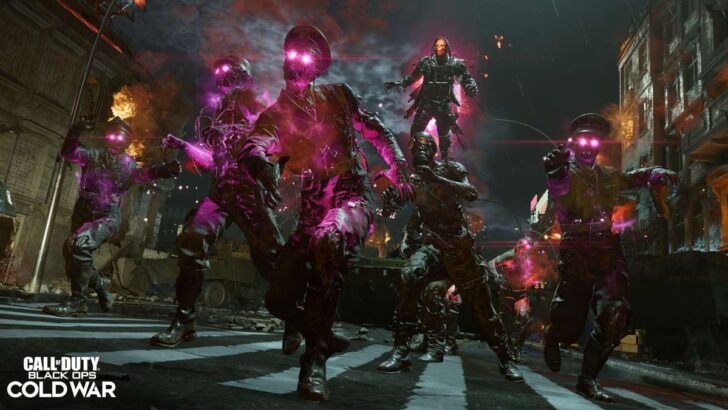 Season Four Reloaded launches with new Multiplayer, Zombies, and Warzone content, including the newest round-based Zombies map “Mauer der Toten,” the return of Rush to Multiplayer, and new game modes like the classic Capture the Flag.Warzone’s first ever objective based mode: Payload with fresh new content like Blueprint Blitz, Sentry Gun, and more.Invite your friends to play during Call of Duty: Black Ops Cold War Free Access Week from July 22 to July 29.

A new war is brewing in the Dark Aether universe. Welcome to “Mauer der Toten,” Treyarch’s newest round-based Zombies experience where Requiem agents will explore a ravaged Berlin after a zombie invasion takes over the city.

Navigate through dark streets and a zombie-filled U-Bahn, and call-in support from Klaus, a new robot companion who aids the team in their mission to survive. “Mauer der Toten” also brings ziplines, a new Wonder Weapon, and a slew of secrets and surprises for Zombies fans to discover.

Stack your arsenal using the new Mule Kick Perk-a-Cola, found in its own signature machine in “Mauer der Toten” and stocked in Der Wunderfizz machines throughout Zombies. Take a swig and carry three weapons as opposed to the default two.

Head to a Crafting Table to engineer the new LT53 Kazimir Grenade, the latest piece of Tactical Equipment. The Grenade’s black hole-like effects will suck in undead creatures, neutralizing them in the process. Jump in after them if you dare.

Get your hands on a new Wonder Weapon with the CRBR-S, an energy-based pistol with three unique upgrade paths that completely change the weapon with each Mod Kit installed.

Rush and Capture the Flag Return to Multiplayer

Rush (6v6): Remastered from Call of Duty: Black Ops II, Rush is a small-sized 6v6 map that takes place in and around a speedball course. Prepare for chaotic skirmishes through narrow choke zones and around the exterior paintball structures.Capture the Flag: In this classic game mode, teams must take the enemy flag and return it to their base while defending their own from the enemy team. A flag will not be captured unless a team’s own flag is safe in their base, so squads must have both a good offense and defense to win the match.

Season Four Reloaded includes two new weapons, unlocked by completing their in-game challenges or by picking up a Blueprint version in the in-game Store. These weapons can be used in Multiplayer, Zombies, and Warzone.

OTs 9 (Launch Week) — Inflict solid damage at a high fire rate with the OTs 9 submachine gun. Sure to be a favorite among Operators who prefer close-quarters battle, this SMG is comparable to the Bullfrog in terms of damage and fire rate.Mace (Launch Week) — Get medieval and knock away enemy Operators and the undead alike using the new Mace melee weapon. Only the strong need apply.

The massive free-to-play Battle Royale introduces its first-ever objective-based mode: Payload. Inspired by large-scale game modes like Call of Duty: WWII’sWar Mode, Payload pits two teams of 20 players against each other in a race against time for crucial intel.

The attacking team must escort vehicles across all checkpoints within the time limit to win the match. It’s up to the defending team to keep that from happening.

Look for Payload in the Featured Playlist Rotation as part of Season Four Reloaded.

Yearning for some of the earlier Weapon Blueprints you missed out on? In this new event type, a Contraband Contract will automatically spawn after completing two regular Contracts, giving you a permanent Weapon Blueprint reward if you’re able to extract it from the DZ. Not a bad way to fill out your arsenal later in the season.

In need of some extra firepower? The latest Killstreak to be introduced in Warzone, the Sentry Gun scans in a near 180-degree radius to detect and attack enemy Operators. If you’re lucky, you’ll discover this new Legendary item within a Red Door room supply box.

The Growing Mystery of the Red Doors

Head to the in-game Store to purchase the new Special Ops: Pro Pack, a six-item bundle featuring two Legendary Weapon Blueprints and a Legendary Portnova Operator Skin, plus a Calling Card and Emblem. Topping it off is a massive 2,400 COD Points that can be used in the Store for another bundle or Battle Pass purchase.

Haven’t yet joined the fight? Get Black Ops Cold War in the Xbox Store today, and prepare for Season Four Reloaded!

Black Ops Cold War will drop fans into the depths of the Cold War’s volatile geopolitical battle of the early 1980s. Nothing is ever as it seems in a gripping single-player Campaign, where players will come face-to-face with historical figures and hard truths, as they battle around the globe through iconic locales like East Berlin, Vietnam, Turkey, Soviet KGB headquarters and more.

As elite operatives, you will follow the trail of a shadowy figure named Perseus who is on a mission to destabilize the global balance of power and change the course of history. Descend into the dark center of this global conspiracy alongside iconic characters Woods, Mason and Hudson and a new cast of Operatives attempting to stop a plot decades in the making.

Beyond the Campaign, players will bring a Cold War arsenal of weapons and equipment into the next generation of Multiplayer and Zombies experiences.

Welcome to the brink. Welcome to Call of Duty®: Black Ops Cold War.