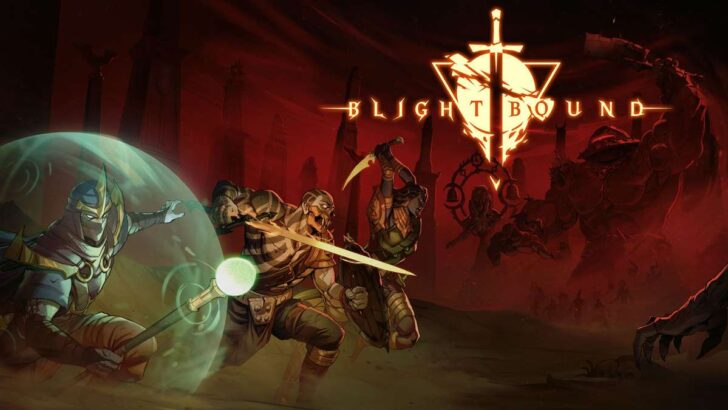 We are a Dutch indie studio based in Utrecht and were founded in the Netherlands in 2007. Since 2018, we have been working with Devolver Digital to bring players our game Blightbound, a multiplayer cooperative 2.5D dungeon crawler that is available now on Xbox One and Xbox Series X|S. Blightbound can be played a couple different ways: via couch co-op, with AI teammates, with other players online, or any combination of the above. If you like what you’re hearing, stick around for more details on the general gameplay and metagame of Blightbound.

The world is covered in Blight and littered with mutated wretches, monsters, and other abominations. You play as the heroes of the Refuge, a mountaintop sanctuary untouched by the Blight. Choose one of 3 classes to play as: a tanky Warrior, a deadly Assassin, or a wise Mage. Venture down into the Blight with your party of 3 heroes, where you need to synergize and combine your skills and abilities with your teammates to defeat atrocious boss monsters, especially on higher difficulties. While you are on your adventures, keep an eye out for survivors for the Refuge and recruit other heroes lost in the Blight. Score some sweet, sweet loot by completing dungeons so you can buff up your heroes and customise them to your unique playstyle.

Unlock and choose from a roster of 20 heroes at launch, each with their own combination of passives, skills, and ultimate abilities. As a Warrior, draw aggression from enemies and alleviate pressure from your teammates while still being lethal against enemies who make the mistake of getting up close. As an Assassin, flank the enemies and unleash your deadly arsenal of weapons and abilities to do devastating damage. As a Mage, use your utility to heal your teammates, dictate enemy movement, and repel enemies from a distance.

However, how you choose to play Blightbound is completely up to you. Every hero has weapon and item slots, and you decide how you would like to build your heroes. If you would like to be a close-quarters Mage, you could equip the Deathbite Staff which turns every third attack into a short range ground slam, throw on the Manaburst Brooch which creates an explosion around you every time you pick up a mana orb, and the Mechanical Wheel which gives you an extra charge and extra cooldown reduction to your dodge skill. Why not also throw on the Healing Flask, which grants you extra health and life, so your now beefy badass Mage can sustain in a close-quarters brawl? (Just remember to also heal your teammates!)

We have made some truly wacky builds during our internal playtests. One of the highlights is a glass cannon Warrior who can almost one-shot elite enemies but falls over if there’s so much as a strong breeze.

After completing levels, you will be rewarded with items. There are more than 200 unique items in Blightbound which allow you to tailor any role to your individual playstyle. Slap on the weapons and items of your choice, lock in your favorite heroes, and conquer increasingly difficult dungeons with your friends, with other players, or with the AI!

We’re incredibly excited for Blightbound’s launch and we hope you are too. Let us venture together into The Blight!

Related:
The Forgotten City’s Journey From a Mod to a Standalone Game
Inside Xbox Series X|S Optimized: Sniper Elite 4
Machines and Guardians of War Devastate Armies in Orcs Must Die! 3