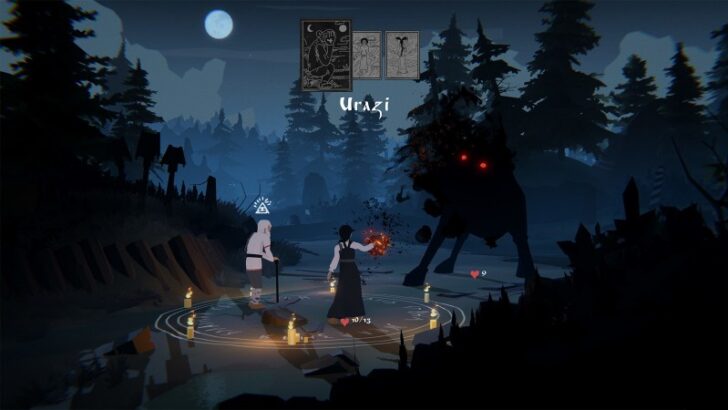 Morteshka and HypeTrain Digital have announced a release date for Black Book, which arrives on August 10. Where can you find it? Well, just about everywhere. Black Book is coming to Steam, EGS, GOG, PlayStation 4, Xbox One, and Switch. If you’re looking for a demo experience before diving into a purchase, the game has a prologue segment available for free right now on Steam and Xbox that covers the tale of Vasilisa becoming a witch, a narrative that flows into the core game.

In the base game, Vasilisa is seeking the titular Black Book for its magical powers, specifically the ability to bring back the dead. Card-based battles are the order of the day as you move through a dark world of Slavic folklore. You’ll meet friendly companions, employ demons to your cause, and collect cards to strengthen your powers as you head through the main story and side content. Make sure you keep your demons occupied, because they’ll begin to annoy and even harm you if you don’t keep them entertained! The various villages, towns, and other somewhat friendly fare as you proceed through dark forests offers some respite from hordes of dangerous enemies and sinister supernatural foes.

If you have tried the prologue chapter, what did you think? Do card collecting, deckbuilding RPG systems work for you? After Slay the Spire, Monster Train, and numerous other offerings have become available as this genre goes more mainstream, they’ve been a blast to experiment with. There’s something special about cutting all the chaff out of your deck and having only your perfect power combos to draw, or creating a massive, towering card giant that’s fueled by its size. What are your favorite deckbuilders, if any? Are you planning to check out Black Book? Let us know in the comments!