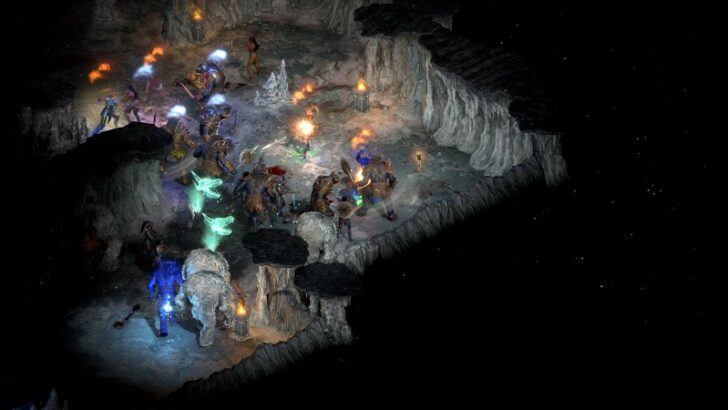 With Diablo II: Resurrected, Blizzard and the Vicarious Visions team did something I thought impossible – they successfully recreated Diablo II the way my mind remembers it. Looking back on the original today, it’s genuinely fascinating how this remaster paints over the old graphics with a masterful brush, showcasing the grim fantasy environments and deadly bosses precisely as I remember them. Of course, the original graphics looked nothing like this back in 2000, and viewing them today is something of a historical horror. Diablo II: Resurrected is an incredible revamp of one of the most important and influential games in history that begs to be experienced by newcomers and veterans alike.

The significant change here is, of course, the graphics, which go up to 4k. At first glance, the new look might not seem like much. I said “Well, that’s pretty much how it was…” However, that’s incredibly far from the truth. In a bit of a curious and way-too-enjoyable addition to the game, players can swap between the old graphics and the new graphics with the touch of a button in real-time, even as spells, effects, and abilities fire off. I spent a ton of time with this feature, experiencing jaw-dropping moments as I compared the old with the new in each Act. While the old graphics look atrocious today and are even challenging to gaze on for long, they are a testament to Vicarious Visions’ graphical upgrade. The new visuals are incredibly faithful to the old vision, with almost none of the notable missteps we saw with Warcraft 3: Reforged where critical units ended up looking strange. By using some form of technical alchemy, the new game is layered directly over the old, and it’s stunning.

This is the first time Diablo II can be played on a controller, and it’s smooth, intuitive, and responsive. Players can assign skills to buttons easily and should make for a slick console experience. While you will find it hard to pry me away from my mouse and keyboard in a Diablo game, this was the first time I’ve been tempted due to the ease of use.

Miniscule changes give players a few quality-of-life improvements. Players pick up gold by walking over it, which is a godsend given the many stacks of littered coins in dungeons. Players have shared stash space to send items to other characters in their roster, which saves a ton of time and energy, as previously it would take a lot of character/game swapping in order to move items around. And finally, a few other options make life less of a chore, like having dropped items show up on the ground without having to hold a button down. None of these changes alter the fundamental Diablo II core, but they make the experience easier to enjoy.

The core of the game is untouched, for better or worse. I’ll still complain about the cramped passageways in the Maggot Lair. Thanks to the isometric environments, one unfortunate click took me directly to my death, derailing a corpse run. A surge of excitement coursed through my body when Baal died and several set items dropped. A wave of despair followed as I had them identified and realized they’re trash. The whole of the gameplay experience can feel quite dated today as you simply walk from area to area, wailing on a single button or two. Nothing has been rebalanced, so some class builds remain much stronger than others.

However, the simple essence of Diablo II – gaining new skills, the never-ending loot discovery and collecting, and blasting through boss after boss and dungeon after dungeon – hold up even after all these years. As in the past, players are encouraged to explore various classes and builds as they collect piles of loot, enabling all kinds of possibilities from paladins that spin magical hammers to bear baron druids. If you have friends to play with, the experience is even more fun, taking on the nightmares together and sharing the rewards.

Diablo II: Resurrected shows why the original title remains the standard against which all other ARPGs are judged. While it doesn’t come with many hooks and ever-evolving content that has become a baseline for the genre as it transformed into a game-as-service model, not all games need to be played with forever in mind. Diablo II: Resurrected proves that Blizzard’s classic is still a blast, even today. Whether it’s your first foray into hell and beyond or your thousandth hour, Diablo II: Resurrected is worth the time.

Concept: Play the formative ARPG Diablo II with a handful of quality of life improvements and drastic visual upgrades

Graphics: The new graphics capture the spirit of the original designs and are lovely to behold

Playability: Anyone can pick up Diablo II and begin collecting loot, though some build planning is recommended to tackle higher difficulties

Entertainment: Diablo II: Resurrected is a mastercraft remaster that reminds us how the original game changed the gaming landscape forever