Dive into the Depths in Sea of Thieves Season Four 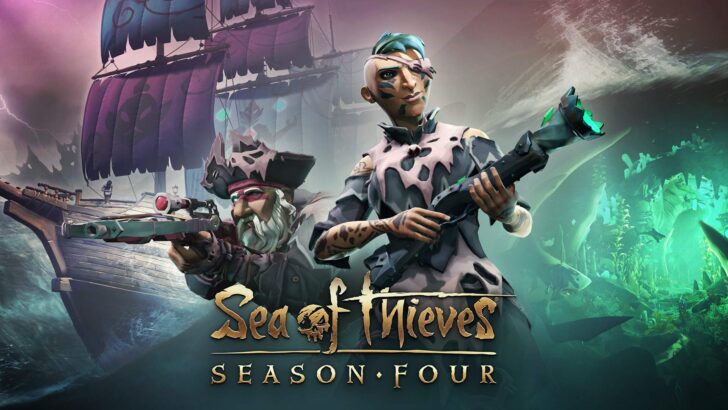 Season Four is the latest Sea of Thieves content update, available September 23 and free for all players with Xbox Game Pass and across Xbox Series X|S, Xbox One, Windows 10 and Steam.         Dive into the Sunken Kingdom to solve puzzles and unearth the secrets of its Siren Shrines, or battle through waves of Ocean Crawlers and Sirens to raid the Siren Treasuries.         Seasonal progression allows all players to earn Renown and rewards, with a fresh array of Trials and Deeds to boost progress and an optional Plunder Pass to expand the reward pool.

As the leaves change and we leave summer behind, Sea of Thieves also enters a new Season with the arrival of Season Four. In addition to new Events, Seasonal rewards and an overhaul to our Trials and Deeds system, Season Four fully unveils the Sunken Kingdom – previously only explorable via the Tall Tales brought in with Season Three, now filled with new treasures to claim and secrets to uncover. Sea of Thieves Season Four is available now as a free download for all players with Xbox Game Pass and across Xbox Series X|S, Xbox One, Windows 10 PC and Steam.

As with previous Seasons, Season Four lays out 100 levels of progression-based rewards obtainable by simply living the pirate life and accruing Renown, and also offers an optional Plunder Pass packed with premium goodies not yet available anywhere else! Find out more about the workings of Seasons and the Plunder Pass in our Seasons Explained and Plunder Pass Explained articles.

First experienced as part of the Tall Tales added in Season Three, the Sunken Kingdom now expands with numerous new areas accessible at any time in Season Four. Locations marked on the ship’s map and visible shimmering spots on the ocean’s surface indicate where pirates can dive down to investigate this mysterious undersea realm.

Within the Sunken Kingdom are six Siren Shrines, each one filled with puzzles to solve and mysteries to uncover, and a cache of deep sea treasure available for anyone who manages to breach its heart. Undersea adventurers will need to be alert at all times, as the Sirens do not go easy on intruders!

Pirates can also dive down to plunder the Siren Treasuries, battling waves of Ocean Crawlers and Sirens to claim the new Coral treasures kept within. To learn more about all that awaits explorers of the Sunken Kingdom, visit our dedicated Season Four page.

Along with these updates, Season Four brings in the latest range of time-limited Events – starting with a celebration of the Sea of Thieves’ annual Festival of the Damned! This year’s themed Event is entitled Fury of the Damned, and will span an entire month as the Pirate Lord proposes challenges to quiet the restless dead that haunt the seas. For their assistance in these island exorcisms, pirates will be suitably rewarded with creepy-crawly cosmetics.

Coming to the Pirate Emporium this Season is the Golden Nile Ship Collection, a lustrous ensemble inspired by a famous waterway and its scaly denizens. Pirates wishing to add a bit of bite to their appearance can also snap up matching weapons and the Golden Nile Costume, which comes with a built-in Sand Shaker emote – perfect for dusting yourself off after a long night of digging for treasure. And for anyone who wants to look extra smug after sinking a ship, new Victorious Weapon Pose emotes are just the ticket. Don’t forget there’s another freebie emote up for grabs too!

As in previous Seasons, pirates can choose to bolster their Seasonal pool of rewards with a brand new Plunder Pass. Don’t get too spooked, but Season Four’s Plunder Pass is headlined by the Jack O’ Looter Costume, inspired by a mythical swindler who haunts the dreams of many a young pirate. Also on offer are matching Jack O’ Looter weapon and ship sets, as well as the Vulnerable Weapon Pose Emote – all available via the Plunder Pass first, before they make their way to the Pirate Emporium in a later update.

New to Sea of Thieves? Find out about the latest free content updates on our What’s New page and pick up some tips from our Pirate Academy, which provides invaluable information on topics ranging from sailing to swordplay as you prepare for your maiden voyage. Learn more about Sea of Thieves at www.xbox.com/seaofthieves, or join the ongoing adventure at www.seaofthieves.com where you can embark on an epic journey with one of gaming’s most welcoming communities!

About the game
Sea of Thieves offers the essential pirate experience, from sailing and fighting to exploring and looting – everything you need to live the pirate life and become a legend in your own right. With no set roles, you have complete freedom to approach the world, and other players, however you choose.
Whether you’re voyaging as a group or sailing solo, you’re bound to encounter other crews in this shared world adventure – but will they be friends or foes, and how will you respond?

A vast open world
Explore a vast open world filled with unspoiled islands, sunken ships and mysterious artefacts. Take on quests to hunt for lost treasure, seek out cursed Skeleton Captains or gather valuable cargo for the Trading Companies. Go hunting and fishing or choose from hundreds of optional goals and side-quests.

Sea of Thieves: A Pirate’s Life
Play the Tall Tales to experience Sea of Thieves’ unique narrative-driven campaigns, and join forces with Captain Jack Sparrow in the newest original story that brings Disney’s Pirates of the Caribbean sailing into Sea of Thieves. These immersive and cinematic quests provide around 30 hours of the ultimate pirate adventure.

Become Legend
On your journey to become a Pirate Legend you’ll amass loot, build a reputation and define a unique personal style with your hard-earned rewards. Adventurer. Explorer. Conqueror. What will your legend be?

A game that’s always growing
With five major expansions and almost a year’s worth of monthly updates, Sea of Thieves is a service-based game that is continually growing and evolving. Check back each month to see what new content has been added.