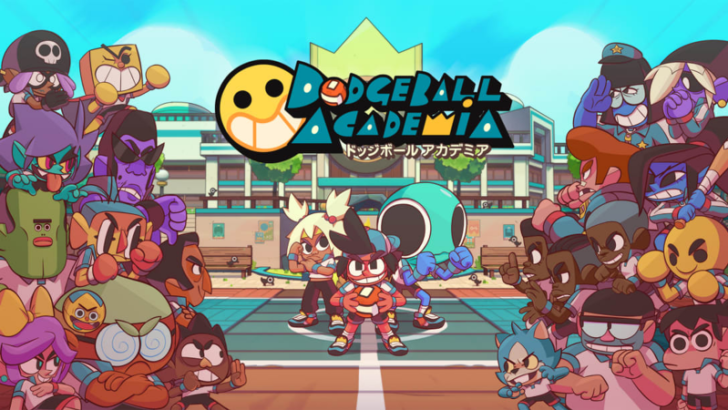 Story-driven sports RPGs such as the early Mario Golf and Tennis games, or most recently Golf Story, have slowly come back in vogue. Brought to life with the art of veteran animator Ivan Friere and Brazilian studio Pocket Trap, Dodgeball Academia is a confident combination of Shonen anime, sports games, and Saturday morning cartoons, creating a thrilling experience to the very last match.

After ditching his old school and breaking free from his controlling parents, Otto wants to prove he has what it takes to thrive at Dodgeball Academia, the premier school for the sport. Professors of the academy initiate the new students by unlocking their extraordinary latent power. These abilities manifest after touching a magical ball, an artifact from the “Great Dodgeball War,” an event that illustrates how ingrained the sport is to this world. Think of this introductory ceremony like X-Men getting their abilities from the Sorting Hat. This amalgamation of some of the most popular tropes in modern media works well and allows the narrative to stretch its ingenuity ideas where it counts the most: on the court.

Dodgeball games play out in real-time, but these games aren’t the one-hit elimination matches you might be used to from gym class. Your primary goal is to reduce the opponent’s health by pelting them with balls, a simple objective, but things get a lot more explosive thanks to the aforementioned special abilities. Over time you’ll level up characters and gain stat boosts and more augments that change how each character plays.

Some students, like Otto, imbue their attacks with elemental effects, others heal their team or teammates, and some cause the ball to boomerang or curve. I’m delighted by the sense of individuality this brings to each athlete on my team and among my opponents. These differences are factors in deciding on your team of three based on their abilities and playstyles. I enjoyed and found success with a balanced group of an attacker, skilled defender, and support player capable of replenishing HP. One of my favorite characters can’t catch balls thrown her way and relies on a more creative method of defense. Instead, you hold the catch button and release it at the right time, and she rockets the ball back at the opponent using a baseball bat.

After charging a meter throughout the match, characters can unleash their Balltimate move, a super technique that can turn the game’s tide. Otto’s Balltimate is a standard Hadoken-like fireball, support character Ballooney puts down a healing puddle, and Mina strikes opponents with deadly lightning bolts. Balltimates are unique to each character and are a significant factor in how I build my three-person team. Balltimates can be used to spam your way through matches, and I did that a few times, but I never felt like I was cheating. Any given match can go south no matter how you try to cheese the game.

Matches in Dodgeball Academia offer a refreshing, if subtle, variety, which keeps the action fresh. Opposing teams have various makeups, and even the court and obstacles change from match to match. Some courts are bigger. Some have oncoming traffic you have to dodge along with enemy attacks. Even the balls vary from battle to battle, sporting different elemental properties and shapes. I wasn’t pleased with the forest court, which obscures the view of the action by covering everything with tall blades of grass. This recurring match-type is annoying; thankfully, they only take up a small percentage of the games you’ll play.

I enjoyed the day-to-day life at the academy. Some days you go to class to train in subjects such as dodging or catching through timed survival minigames; other days, you’re sent on quests by the professors. Peppered in between are matches in a schoolwide tournament to decide the best team on campus. Each day brings a fun self-contained story, with pieces that nicely culminate on the final day of the competition. Along the way, Otto and his ever-growing slate of misfit teammates have to contend with rampaging training robots, scheming classmates, and a cult of students who deeply believe dodgeballs are square-shaped. Each student in Otto’s class has their quirks and personalities you learn throughout the game’s eight chapters, and while most are antagonistic, all are enjoyable.

Unfortunately, the action never strays far from school, its parking lot, and a nearby forest. A brief stint to an icy mountain brought some enjoyable platforming not seen in the rest of the game that I wish was more prevalent. Running through the same three areas over again, seeking the next objective is repetitive. While I enjoyed what’s there, the world’s mundanity compared to the absurdity of the characters and their powers was a letdown.

Fortunately, an incredible soundtrack kept me trotting happily back and forth around the school. With tunes like the jaunty and hopeful dormitory and leisure area themes or the energetic wailing electric guitar-driven song heard on the school grounds, Dodgeball Academia has my favorite game soundtrack of the year so far. It also doesn’t hurt that the battle intro music seems heavily inspired by the Pokémon games and features a similar alarming intro and triumphant victory fanfare. I haven’t woken up a day this week without something from this soundtrack playing on loop in my head, and I wouldn’t have it any other way.

The art and character animation are equal to the music. Pocket Trap did a great job giving each sprite a big personality, even in their standard idle animations. Ballooney’s deflating head, the Principle’s gleaming badge flick, and Vampy’s animalistic movements are noticeable minor touches to some spectacular character work. These characters look plucked from a Cartoon Network series. While I expect that quality in cutscenes, the art and animation even shine in the dodgeball matches. Whether it’s the main characters and their attacks, or standard nameless enemies, everything has an excellent way of moving and interacting on the court.

I may have some minor quibbles here and there about certain courts or reused environments, but at the end of the day, Dodgeball Academia is a champion in its field. It provides the best parts of sports RPGs with cheeky characters, flashy special moves, and gameplay that’s fun to master. Better yet, the package is enhanced by a killer soundtrack. Look no further than this gem if you want to have a great time for a dozen hours.

Summary: This goofy and energetic sports RPG with the soul of a Shonen anime passes with flying colors.

Concept: Take an excitable dodgeball prodigy through fantastical classes at the world’s premier academy for the sport

Graphics: With character designs on the level of the best cartoons running, Dodgeball Academia is plenty of fun to look at

Sound: This peppy soundtrack is full of earworms that should stick with you on and off the virtual dodgeball court

Playability: Easy to pick up with plenty of abilities and characters to learn and juggle throughout the adventure