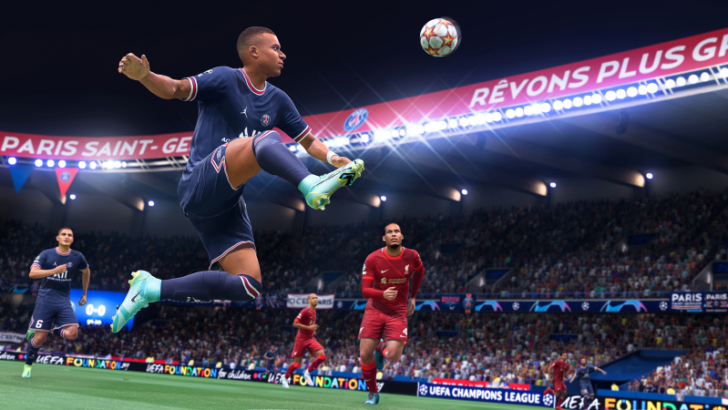 FIFA 22 is the first installment in the popular football franchise to be completely designed for a true next-gen experience. The sheer power of the PlayStation 5 and Xbox Series X/S have led to advancements for the team at EA Canada that are sure to excite devoted fans of the franchise. With the new addition of Hypermotion Technology (exclusive to PlayStation 5, Xbox Series X/S, and Stadia versions), FIFA 22’s gameplay, on a visual and analog level, feels much tighter this year. I got some hands-on time to test out these new features and was impressed at the new level of immersivity.

First thing’s first: what is Hypermotion Gameplay Technology? You may have watched the trailer above and are still unsure about how this shifts the FIFA formula. As opposed to capturing life-like football maneuvers by way of optical means – going to the studio and applying conventional mocap procedures with only a few players on the pitch at a time – Hypermotion allows EA Canada to implement what it calls “advanced 11v11 match capture” and “machine learning.” For the first time ever, FIFA’s physics and fluidity are directly informed by motion capture from 22 professional footballers playing intense, untampered, real-time matches. Cutting-edge computers use the data gained from these matches to imitate player movements and create new animations on the fly – and there are over a whopping 4,000 new animations! This is three times more than previous titles.

How does this translate in-game? I only had access to the classic kickoff mode, but after choosing a team and walking onto the pitch, I immediately noticed that the stiff movements from FIFA 21 were rarer. In fact, each footballer looked and felt more human. Players step into passes and readjust depending on where the ball meets their feet. Moreover, those odd ragdoll entanglements that happen during air battles or sudden tackles are nowhere to be seen. In FIFA 22, the smaller interactions truly go a long way. Players argue with one another (although this animation was hard to see with the default, zoomed out camera) and you might even catch someone wiping the sweat from their brow. This seems minimal, but each interaction gives matches more nuance.

I’ve never been a particularly skilled player, but the “Tactical AI” in FIFA 21 offers more challenge and is consequently more rewarding. The defense moves as a unit, which was a little robotic from time to time. Opponents close in on your position and limit passing lanes as often as possible. This also makes racing past defenders more difficult, which is a nice touch seeing as how the FIFA series (and many other sports series, for that matter) prioritize high speed stats. Sprinting down the pitch on offense is a blast too. Smoother transitions allow you to be more explosive. Lob and through passes are more natural when the receiving footballer slows down to seemingly assess the ball’s trajectory and prepare accordingly. And since the defense pressures you as much as it can, you’re better off performing agile dribbles or fakes to get out on top.

My time with the game was brief, but the moment-to-moment action feels steps ahead of its predecessor. The new animations and realism go a long way in making bouts more atmospheric and visceral. Outside of gameplay, EA Canada is working to fine-tune FIFA 22’s other modes but, for now, polishing up the on-pitch physicality has emerged as a primary objective for the developer; one that fans should notice when the game launches later this year.