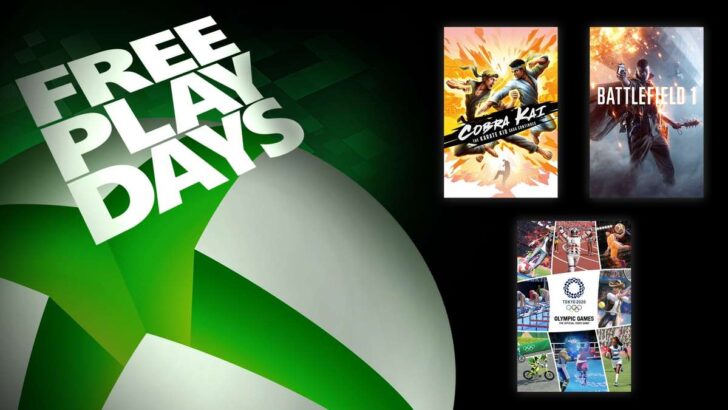 Sweep the leg, fight in the Great War, or compete for glory. Cobra Kai: The Karate Kid Saga Continues, Battlefield 1, and Olympic Games Tokyo 2020 – The Official Video Game are all available for Xbox Live Gold and Xbox Game Pass Ultimate members to play from Thursday, July 22 at 12:01 a.m. PDT until Sunday, July 25 at 11:59 p.m. PDT.

How to Start Playing

Find and install the games here on Xbox.com. Clicking through will send you to the Microsoft Store, where you must be signed in to see the option to install with your Xbox Live Gold membership. To download on console, click on the Subscriptions tab in the Xbox Store and enter the Gold member area to locate the Free Play Days collection on your Xbox One.

Purchase the game and other editions at a limited time discount and continue playing while keeping your Gamerscore and earned achievements during the event! Please note that discount percentage may vary by region.

Cobra Kai: The Karate Kid Saga Continues
Cobra Kai: The Karate Kid Saga Continues will be available to play during this Free Play Days weekend! Taking place alongside the Netflix series, Cobra Kai gives you the chance to play and fight as your favorite characters, including Daniel LaRusso, Johnny Lawrence, Miguel Diaz, Hawk, and many more, as you explore familiar locations and beat up bad guys. You can go it alone, or play with a friend in this co-op brawler. If you can’t get enough during the free play weekend, the game will be discounted 50% until August 8. Choose your side and team and show the world which strip-mall dojo runs this town!

Battlefield 1
This weekend, experience the dawn of all-out war in Battlefield 1. Discover a world at war through an adventure-filled campaign, or join in epic multiplayer battles with up to 64 players. Fight as infantry or take control of amazing vehicles on land, air, and sea, and adapt your gameplay to the most dynamic battles in Battlefield history. During this time, you can save up to 70% off Battlefield 1. Xbox Game Pass Ultimate members can also play Battlefield 1 anytime via your EA Play membership.

Olympic Games Tokyo 2020 – The Official Video Game
Prepare to unleash the competitor within you in your march for victory. Create your athlete, customize their skills, and pick the perfect costume in a party game which anyone can pick up and enjoy. Celebrate the start of the Olympic Games in style between 18 fun-fueled sporting events, from 100m, Basketball, Boxing, and more. Going for the gold has never been this much fun.