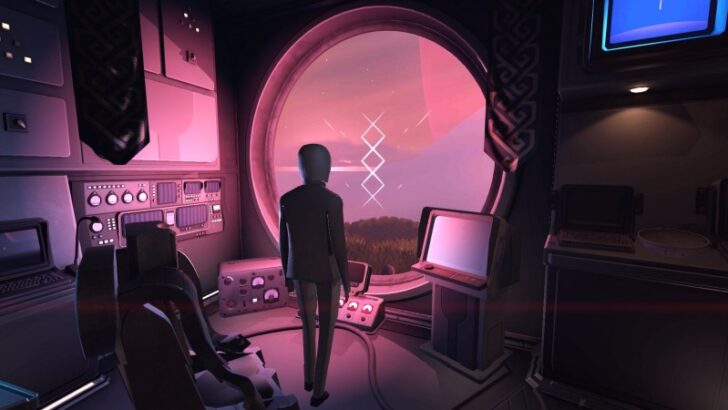 “Surrounded by wonder, touched with dread” is a line from Jett: The Far Shore’s holy writings. These scriptures guide Mei, the protagonist, and seep into every aspect of the game. Conveniently enough, the quote is an apt description of my time with Jett, and not always for the best reasons. Some narrative moments reach high points, though the title’s tedious gameplay always brought me crashing back down.

Jett begins in a world on its last legs, where the inhabitants realize they are doomed. The adventure kicks off powerfully as I listen to my people’s mourning, knowing I won’t share their fate. I’m also burdened by their hope that my quest will save some part of civilization. Looking to religion for comfort, the people cling to the idea that my crew’s prophesied scientific and spiritual mission across the galaxy will save humanity from utter annihilation. The narrative never spells out what caused my home world’s sad fate, but it employs excellent visual storytelling to fill in the blanks. Smokestacks choke the skies around you, smearing smog and soot across the landscape. The bleak spectacle brilliantly sketches out one reason for the crisis: unchecked industrialization. In a darkly ironic way, it suggests that the factories creating your planet-escaping technology are killing those remaining, which inspires some acute survivor’s guilt.

The world’s stylized, minimalistic graphics provide a distinct and beautiful look, especially during key moments like your crew’s take-off when the horizon beautifully transitions to the stars. Jett has a specific, retro-futuristic design. This style works because you are bringing the past with you through time and space. While chapter 0, a kind of prologue, has stirring goodbyes and thought-provoking imagery, the rest of Jett struggles to measure up.

After making my way to “the far shore,” a place of legend described by the holy texts, my scout team’s adventure quickly went from delightful to dangerous. After I was exposed to the alien elements and touched by a mysterious presence, I began to see things. While passed out after an accident, I had wild dreams about my village with shadowy figures in place of people. But the visions didn’t end when I woke up, and I began to see signals on the ground that my crewmates couldn’t. These signs let me know when I could interact with something, like when I used my ship to make flowers bloom. Though these exposure-driven illusions lead to a series of wonderfully strange sequences, the story ultimately doesn’t go anywhere satisfying with them.

Much of the game takes place on your jett, a two-person, superpowered craft that lets you soar through the environment. Unfortunately, the strong imagery from the first section of the game is lost when flying. The pared-down art style in these sequences makes the world look like nondescript blocks of color. As a result, the characters’ reactions to the visually empty – but supposedly awe-inspiring – world are jarring. I found it difficult to gauge my velocity due to the environment’s scarcity of landmarks, making me feel like a bug buzzing around the screen rather than an interplanetary scout traveling at super-speeds.

Piloting your jett never feels good. The camera centers on the middle of the screen, not the vehicle, so simultaneously moving and looking where you’re going is awkward. I grew frustrated multiple times when performing delicate operations, like getting into the shadows for cover or aiming the release of grappled objects, because the controls are unwieldy. Additionally, the game places a tedious limitation on flying at full speed. You must continuously watch a meter to ensure you’re don’t go too fast for too long lest you overheat and blow out your engines.

Getting out of the ship is also trying. Every time my character’s feet touch the ground, I feel like I’m wading through pudding. And the interactions outside the jett, which often feature exposition-filled dialogue, are rarely remarkable enough to make up for the wearisome traversal. Many of these issues are not game-ruining flaws by themselves, but Jett has so many minor nuisances that they add up to make exploration a chore, which is a shame for a game about space exploration.

Jett: The Far Shore shines bright in some narrative-heavy sections, and its visuals can be impressive, but – despite starting off full of potential – it fails to fulfill its promise. Sadly, Jett’s finale, much like my time spent piloting its interstellar spacecraft, feels more unfulfilling than thought-provoking.

Concept: You and your team of scouts leave behind your dying home planet to fulfill a prophecy and colonize another world

Graphics: The striking minimalist look makes for some wonderful cinematic shots, though it doesn’t always work for the action sequences

Sound: An instrumental score swells dramatically and shrinks intimately to strike the right mood for the moment

Playability: Unfortunately, the flying controls are never quite as precise as you, or the game, want them to be, and moving in the first-person story moments feels sluggish

Entertainment: There are highlights in this game’s visuals and storytelling, though these get bogged down by basic mechanics and uninteresting moment-to-moment gameplay