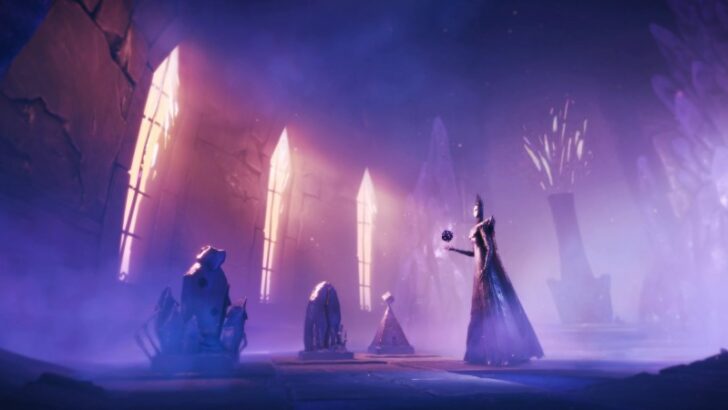 Rating: Everyone 10+
Reviewed on: PlayStation 5
Also on:
PlayStation 4, Xbox One, PC

What happens if we give in to fear? If we let it drive us, allow it to mold our world? Setting off from her home in the lowest realm of the six kingdoms, our heroine, Even, uncovers these mysteries in Lost in Random’s compelling coming-of-age story. Of course, examining fear’s effects isn’t Even’s goal. With singular determination, Even leaves behind her parents, town, and everything she has ever known to get her sister back.

Even’s older sibling, named Odd, turns 12 as the game begins – a birthday with special significance for children in the kingdom of Random. By order of the Queen, the preteens participate in a dice-rolling ceremony which forces them into a new life based on the whims of chance. The game’s early hours concentrate on building an authentic-feeling world. From childish games to a propaganda-packed speech, every element underscores – like a Grimm’s fairy tale – how the laws in Random are both dark and unquestionable. Which ultimately succeeded in making me want to help Even break them.

Odd rolls a six and is ripped from her family and home in Onecroft, the village at the hierarchical and literal bottom of the multi-tiered kingdom. While the scene should tug at my heartstrings, it would have hit harder if it focused more on the family’s reaction to Odd’s abduction. However, this inciting incident provides an understandable motivation for my quest and sets an unnerving tone for the rest of the game.

Though honestly, Lost in Random is plenty unsettling thanks to its gloomy but beautifully sculpted visuals. The clay-like art paired with the gothic vibe screams Tim Burton, and Lost in Random absolutely knows it. The opening narration mirrors the beginning of Burton’s The Nightmare Before Christmas in a bold, playful way and that energy that runs throughout the game’s writing. This lighthearted undercurrent nicely balances Lost in Random’s disquieting exterior.

Beginning my quest, I wander into a fog-shrouded, forgotten valley where I discover my cubic partner, Dicey. Armed with my animated die, a handful of playing cards, and a slingshot, I’m ready to take on any enemy. Lost in Random’s innovative combat integrates several, usually mutually exclusive, systems. Real-time combat is the central gameplay layer, using elements of card and dice-based strategy.

While your slingshot can’t damage the Queen’s minions, it can break off pieces of energy-providing crystals growing on them. By collecting fallen crystal shards, you fill an energy meter. Each time it’s filled, a card in your deck moves to your hand, but you can only hold five total at one time. This is where Dicey comes in. When you are ready, you can move to the strategic portion of combat by rolling the die. This slows time, giving you an opportunity to consider your options. Rolling a high number with Dicey allows you to play more, or higher valued cards from your hand; these will then manifest imaginative, sometimes humorous, items for you to use in the real-time fight. For instance, I enjoyed summoning a sword comprised of floating metal shards and polyhedral dice to attack enemies. If I needed a more hands-off approach, I called forth a large blob whose scream can harvest crystals or do damage if combined with a specific card. The combat constantly flows back and forth between playing cards and the button-mashing fight.

The system is genuinely creative, smoothly executed, and every layer works in tandem to create a unique experience. Disappointingly, these systems don’t meaningfully evolve over time, and by the adventure’s midway point, my deck was stagnating. But Lost in Random keeps things from growing stale by alternating combat challenges with tabletop-inspired arenas. In one of my favorite arenas, I use Dicey and my sling to steer balls into a large goal while avoiding the enemies spawning around me. The different arenas cleverly shake things up by changing my objective from defeating foes to accomplishing a game-specific goal, introducing much-appreciated variety.

As Even treks across Random’s distinct districts, she witnesses how the actions of others, borne from mistrust and selfishness, make the world worse. In Threedom’s feudally-inspired society, noble triplets rip their realm apart, waging war on each other in the wake of their father’s mysterious death. Two particularly terrifying citizens of Fourburg lose their humanity and nearly kill Even over greed. And Even’s sister, who appears to her in visions, also seems to succumb to the corrupting influence of fear. Each wonderfully scripted moment makes me feel, in turns, angry, horrified, and disappointed alongside the protagonist. When Even felt like giving up, I was right there with her. But overcoming these struggles in Lost in Random’s well-crafted story transforms Even into a hero, not just for her sister, but for the entire realm.

This shadowy fairy tale ties together a thoughtful story, evocative art style, and clever combat system in one engaging experience. Lost in Random has a lot to offer at any time, but the game’s bizarre world and characteristic, spooky atmosphere make it an excellent pick for the Halloween season.

Summary: This shadowy adventure will get you in the mood for Halloween all year around with its atmospheric design, creative combat system, and well-crafted story.

Concept: Battle your way across the six districts of Random with the help of a living die to save your sister from a wicked Queen

Sound: Quality voice acting combines with the atmospheric score to pull you into this dark adventure

Playability: The multilayered combat gives players a bit of strategy and real-time action in a system that is surprisingly slick, though a bit static