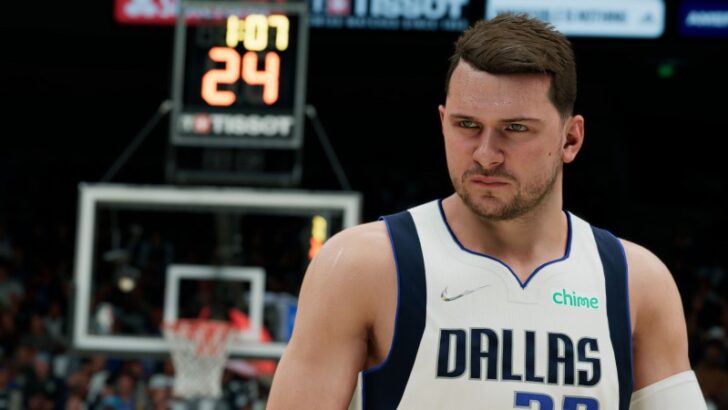 Like every NBA team, Visual Concepts must get ready for another season and try to improve its roster and make the lineup stronger. Last year’s entry was all about making the jump to new-gen hardware and truly taking advantage of the tech with impressive graphics and lightning-fast load times. You could say the developer found its core players when it made that move, but as with every roster, there’s always room to grow into a title contender. Visual Concepts hasn’t found its championship year, but it made some solid improvements and changes to get there eventually. NBA 2K22 may not feel significantly different from last year, but some bright spots make it more fun to play and set a promising foundation for the future.

The gameplay, which has always been top-notch, doesn’t make any huge shifts from the formula. It took me a few games before I truly appreciated the enhancements. This year focuses on rewarding your basketball IQ and having more realistic features, like fatigue, factor into your performance. That doesn’t mean your star players won’t shine and easily be able to dominate the game, but you might miss a few more baskets or get blown past for being out of position more than in previous entries. It’s a change I’m all for, as previously it felt like overpowered stars mattered more than playing good team basketball.

The defensive game is where the tweaks are most noticeable, as positioning can make or break you. If you don’t cut off your man appropriately or commit to the wrong play, you pay for it. Blocking and shot contests are reworked, so predictable plays are properly defended more realistically. I also really like the new shot meter, which takes into account shooting ability, distance, fatigue, and defensive coverage. Getting a basket is a good mix of skill and player talent that previous entries have struggled to perfect. You also can’t take anything for granted and assume that since your player is elite, the shot will go in, and forcing a shot up often fails. Some new dribble moves provide more variety to ball handling, and this is another area where the differences in player skill are evident in how they look and feel when dribbling.

As for modes, MyCareer probably saw the most significant changes, taking place entirely in The City. In this sprawling multiplayer hub, players can do everything from shopping for new clothing to playing in pick-up games and tournaments. That means you’re no longer following a huge cinematic, authored storyline as in previous years; instead, you’re living out your NBA career in this venue, visiting agents at their headquarters, meeting with reporters for exclusive interviews, and going to the practice facility for team practices. Visual Concepts has leaned into the RPG elements, with a huge quest system that ensures your player always have something to do, whether it’s working on their NBA career, advancing their personal brand, or taking on online challenges for extra goodies.

MyCareer still has a story path, playing as “MP” an up-and-comer who turned heads with his YouTube channel and is carving out his own unique path in the NBA. This approach feels fresher than previous years, with Visual Concepts choosing to show the different ways players can make a name for themselves and how social media can play a huge role in a player’s rise to fame. You can decide to focus solely on basketball or build your brand with ventures into music and fashion. During my time, I released a track with rapper The Game and started my own clothing line for comfortable but stylish athletic apparel. The story is silly at times, but I enjoyed it for that reason. This mode also adds some fun diversions from the NBA season, but be aware that if you do enter the fashion track, you’re expected to use the virtual currency (VC), which you can earn in-game or buy using real-world money, on clothing to impress. That said, the mode is still a grind, and it doesn’t help that most quests are repetitive, sometimes being a rehash of the same content (the music trivia is egregious) or require you to participate in boring fetch quests. The City is still a pain to get around until you open up better vehicles and additional fast travel options beyond your apartment.

You only enter The City as a male MyPlayer, which is disappointing. NBA 2K22 does bring back The W if you want to forge your own WNBA career. While this mode laid a great foundation last year, it’s disheartening that Visual Concepts didn’t build off it more for NBA 2K22. The only significant addition is the ability to practice with other WNBA stars to learn their skills alongside some gameplay improvements to better mirror the women’s game, especially in the passing department. However, the mode feels vacant of meaningful interactions and rewarding content. I’d love to see scenes and press conferences to really showcase my player’s personality and choices about her path in the league, as you see in MyCareer.

MyGM is also very similar to last year, except with more staff members for various positions to hire, such as a sleep doctor or perimeter defense coach. This encourages you to think more about hires. Do they fit your coach’s system? Do you put up with staff members who have a negative trait or two in favor of their other superior skills and perks? It’s a small addition but gives you a bit to think about when assessing your team’s needs. This mode is fun but is beginning to lose its allure due to not having any significant changes in recent years.

MyTeam, where you open card packs to create the roster of your dreams, got one of my favorite additions: drafting. Now you can build a roster by flipping over three cards in a pack of five to create your team at various positions. It adds some unpredictability and luck to the equation, but I enjoyed creating a team this way to play others online. Depending on your wins and losses, you get extra rewards and more attempts at drafting players to keep making your team better.

For those who like getting goodies and seeing your work going toward something, seasons are now across all the game’s main modes. Seasons run every six weeks and allow you to get free items like clothing, card packs, and more. All you need to do is complete objectives (mostly playing games) to reach certain reward tiers. Modes like MyTeam and MyCareer have daily rewards that give you small freebies just for logging in. This is a smart change; I always felt like I had something to look forward to, and it helped to have some rewards to chase as an incentive to keep playing. While this is an improvement, microtransactions still rear their ugly head in NBA 2K22; most players put down VC to up their player’s stats faster or get lured by cosmetic items to improve their look. You earn VC by playing games, but it is a grind, which is why so many reach into their wallets. At the very least, clothing pricing seems more reasonable, but players only have slow-moving skateboards to navigate The City seems like a carrot to get them to upgrade.

Instead of walking into the arena and making a grand statement, NBA 2K22 just plays decent basketball. You’ll see a few highlight clips, but none that make you want to keep watching in awe. Still, NBA 2K22 is an improvement over last year, even if it’s disappointing that it’s not making more significant moves. Hopefully, next year we see more shakeups to the lineup to make the game a little more exciting and feel like Visual Concepts is gunning for that championship title.

Summary: NBA 2K22 may not feel significantly different from last year, but some bright spots make it more fun to play and set a promising foundation for the future.

Concept: Build on the innovations from last year’s new-gen console debut while adding some new touches across all modes

Graphics: The ultra-realistic player models and their on-court moves wonderfully resemble the real world. The little details, from the crowd to sweat on the players, are a nice touch

Sound: Once again, the soundtrack provides energizing beats to get you in the zone, while the commentary still stands as some of the best in sports games

Playability: The new shot meter goes a long way in providing a smoother, more natural experience. Those with high basketball IQ on both sides of the court should often prevail

Entertainment: NBA 2K22 makes some smart and interesting changes and refinements. Unfortunately, they aren’t a large enough leap to truly dazzle the audience