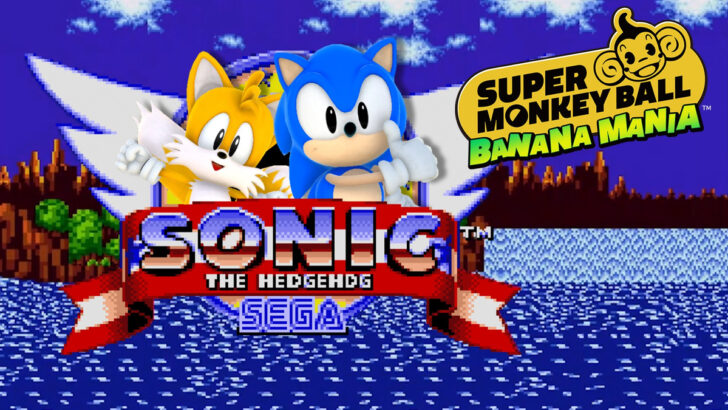 We’re very excited to reveal today that Sonic and Tails will roll into Super Monkey Ball Banana Mania as playable characters when the game launches for Xbox One and Xbox Series X|S on October 5!

This special Sega collaboration marks the respective 20th and 30th anniversaries of Super Monkey Ball and Sonic The Hedgehog (both actually share the same June 23 birthday!). The Blue Blur and his two-tailed sidekick speed into the world of Super Monkey Ball in time to join AiAi and the monkey gang for their latest adventure, with both characters free and unlockable through normal gameplay right at launch.

Sonic fans will enjoy playing as classic versions of their favorite characters, which celebrate their historic legacy over the years. Little touches like replacing AiAi’s favorite bananas with Sonic’s rings, or Sonic’s Spin Attack when he builds up pace add to the authenticity. Both can be unlocked for free from the Super Monkey Ball Banana Mania point shop by accruing points from gameplay (time required will vary but most players will be able to do it within 30 minutes of play).

☆☆☆☆☆
1
★★★★★
$39.99
Pre-order
Roll through wondrous worlds with AiAi and friends as you race to stop monkey mad scientist Dr. Bad-Boon from blowing up Jungle Island! Join the all-star monkey team of AiAi, MeeMee, GonGon, Baby, YanYan and Doctor as you bounce, tilt, and roll your way across hundreds of delightfully crafted levels and mazes. It’s monkey business for the gang – play solo or with friends as you take down Dr. Bad-Boon and steal back your beloved bananas!

Related:
Meet the Hashira of Demon Slayer -Kimetsu no Yaiba- The Hinokami Chronicles
Go for Gold in Olympic Games Tokyo 2020 – The Official Video Game
Inside Xbox Series X Optimized: Yakuza: Like a Dragon