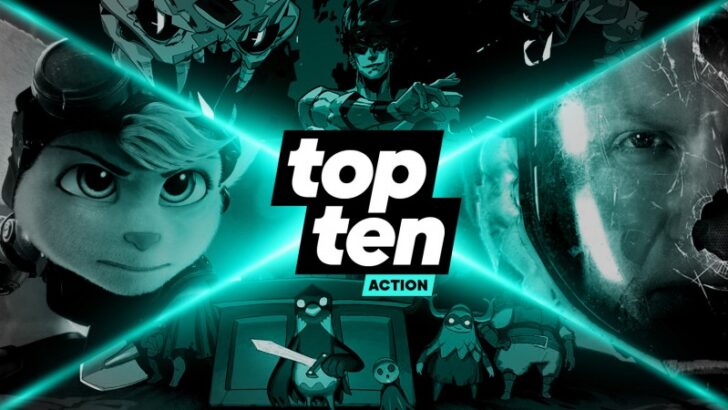 Over the years, what defines a game as the “action” category has gotten more ambiguous than ever, as many games now include aspects of multiple core genres. However, one thing remains certain – games in this category give the player a polished, exciting experience. So, what is this list all about? This isn’t a Top 10 Action Games of All Time list or a Top 10 Action Games of a Generation list. Instead, we’re tackling this one from the angle of what’s important, what’s incredible, and what’s fantastic right now. As in today. This week. This month. So when you don’t see a Dark Souls game on this list, that’s why even though I’d recommend a fresh playthrough of Dark Souls 3 every day. This ever-shifting list aims to capture the highlights of the now and what we think you’d love to be playing this very moment. Presented in alphabetical order, this list keeps it fresh. Let’s dive in!

2021 has delivered several great indies, Death’s Door is among the best. Channeling a bit of Zelda, a bit of Metroid, and a bit of Souls, players take on giant bosses and explore enchanting scenery. The soundtrack is also grand, and hey, you get to play as a bird, which is even cooler.

Exploring old areas of the world with new equipment and finding out how to use your powers for maximum effect is fun, and a minor progression system keeps you searching for secrets behind every corner and collecting resources from every foe bested. From the tutorial living castle on down the line, the boss battles are highly engaging and a blast to master. Death’s Door is currently available on Xbox One, Xbox Series X/S, and PC. Check out our entire review here.

Ghost of Tsushima impressed on many levels during its initial 2020 release, letting players explore breathtaking scenery while participating in riveting combat. Little touches like the Kurosawa mode that transforms the game into a black-and-white vision that one might remember from films like Seven Samurai make all the difference here, as you can tell that a deft and practiced hand went into the creation of every element that makes up the whole of Ghost.

The director’s cut is easily the best way to play Ghost today and comes with the new Iki island expansion that gives players plenty of more content to engage with. A director’s commentary is adds significant depth for players that want to learn more about the game’s creation, the real-life events that inspired it, the setting, and so much more. Since its release, Ghost has also received other major updates, including a massive multiplayer experience that you can take on with friends.

Roguelikes find plenty of appreciation these days, but Hades may be the one that gets everyone chasing their next run and rockets the genre to the spotlight in the coming years. The “just one more run” cycle has never been more apparent, and Hades throwing in some story to unravel and fantastic characters to meet adds a bit of zest to the equation that’s tough to beat.

Hades has style, it’s got permanent progression to keep things rolling along, weapons to master, and all kinds of secret unlocks to find. So why on earth are we talking about Hades now? You probably already knew this game rocks. However, it just came out for major consoles. Previously, you’d have to play on Switch or PC, but now you can take the trip through hell on PlayStation and Xbox. It’s absolutely a journey worth taking.

Sometimes, games shake things up or make incredibly bold choices. It Takes Two is a co-op-only romp designed for play with a friend. In fact, you’ll have to have one to get through it! Whether that’s a longtime friend, an acquaintance, a significant other, or just your bud Larry from down at the arcade, It Takes Two presents a host of problems that naturally take two to deal with.

Conquering each puzzle and challenge is likely to strengthen your bonds both inside and outside the game, and it’s a fairly fascinating design decision. Because of its forced co-op nature, It Takes Two might not get all the attention it deserves. If you have the means, enlist one of your friends to take this enchanting journey with you, or maybe even use this as an opportunity to make a new one!

For Marvel’s Spider-Man: Miles Morales, if you can play it on the PlayStation 5, you should. Suppose PS5’s power isn’t obtainable due to the various factors from how COVID-19 or scalpers have impacted console availability. In that case, you could always go back and play Marvel’s Spider-Man, but if you have the means, Miles Morales on PS5 is the choice of the moment.

While it’s significantly shorter than the original game, it’s packed with epic moments and battles. Miles’ abilities change up the gameplay quite a bit, and zipping around the city is an incredible feeling. In addition to playing exceptionally well, Miles Morales on PlayStation 5 is one of few games available right now that takes advantage of current-gen hardware to show off what video games can do right now

While Rise’s endgame and rampage system has been divisive among fans, there’s a lot to love about the latest entry in the Monster Hunter series. The Switch exclusive is eventually making its way to PC, but it’s worth checking out now if you have Nintendo’s portable power.

From making awesome ice-cream combinations to riding around the world on your doggo friend, Rise keeps the systems that everyone loves from previous entries and adds a few new quirks. Crafting new and powerful gear and taking on stronger and stronger monsters is always a good time. Of course, if you don’t want to play Rise or don’t have a Switch, Iceborne should be plenty to tide you over.

Ori and the Will of the Wisps

Ori and the Will of the Wisps is action-packed and challenging, but it’s also an absolute work of art. Featuring stunning visuals to go along with the razor’s edge gameplay, few games ascend to this level of prowess within the neo-Metroidvania genre. Ori might just melt your heart as you maneuver through its best-in-class platforming and combat combo.

The story and setpieces arc you through wonderful whimsy and fleeting moments of terror, so be ready for an immersive, enchanting adventure that loves showing off and keeping the player completely enthralled. While Ori and the Will of the Wisps can be brutal, progression mechanics help keep things going even when the journey can be tough.

This early into the console cycle, we’re looking for those big games to pave the way and show off the power of the new systems. Ratchet & Clank: Rift Apart does this, and how. While there’s nothing new about jumping around and blasting enemies, does it ever look good here as you flip through rifts with absolutely zero load time, something that’s sure to wow even the most hardened game connoisseur.

Ratchet & Clank: Rift Apart feels great to play, and more importantly, all of the action feels like it was crafted with fun as the focus. The cartoony world is a cohesive joy to explore, and everything from the DualSense haptics to the impressive graphics makes this a boisterous, festive ride.

Terrifying, exhilarating, and epic, Housemarque successfully translates fast-paced arcade action into a mysterious alien shooter. Returnal is one of the best games of the year and brilliantly seams various genres and features together to create something special. From piecing together the mysteries of the alien planet to taking on unforgettable bosses in an atmosphere drenched with dread, Returnal serves up tension with unyielding action.

The only place you can play Returnal right now is on PlayStation 5, but perhaps we can hold out some hope that it may come to PC in the future. Check out the entire review here.

Scarlet Nexus may not have a ton of exciting sidequests, but the brain-bending journey through a future where technology focused on the mind is stylish and slick. Using telekinetic powers to rip down massive ice sculptures, impale opponents with chandeliers, or simply throw around anything out of the scenery at your bizarre-looking opponents starts fun and gets much better as the game goes on.

At first, you get the satisfaction of ripping a traffic light out of the ground and slamming it into an opponent. Later, you call upon the power of your friends and allies to create incredible combos and chain attacks that send your enemies reeling. It’s all served up with a flashy aesthetic that makes Scarlet Nexus stand out. Check out the full review here.