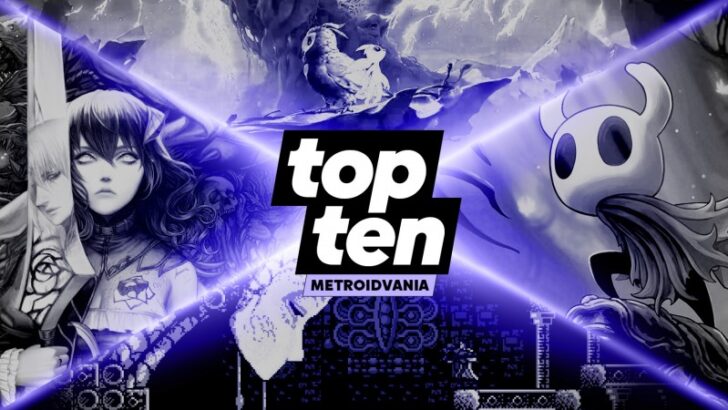 Whether you call them Metroid-likes, exploration-based action platformers, big map adventures, or simply Metroidvanias, this sub-genre has exploded in popularity. What was once a criminally underused design template has become one of the most commonly used formats in games. That’s especially true for indie developers, who seem more than happy to make up for prolonged droughts between actual Metroid and Castlevania titles by concocting their own unique spins on the style. While some 3D games have adopted the formula to success (see: Batman: Arkham Asylum), this list will only highlight 2D-style titles for the sake of clarity. Here are 10 great Metroidvanias, listed in no particular order, that you’ll have a great time getting lost in.

Hollow Knight boasts engaging combat, a haunting beauty, and a delicious difficulty that makes it one of the most beloved entries on this list. Players control a diminutive knight fighting to keep a kingdom of sapient bugs from falling to a devastating infection. Combat feels great, and flexible upgrades encourage you to tinker with different builds to tackle an assortment of tough-as-nails enemies and intimidating bosses. Finding and purchasing a map to see the world can be annoying, but it forces you to internalize the eye-catching world. Hollow Knight’s skill ceiling may be higher than the average Metroidvania, but it rewards patience and skill with an engrossing adventure that continually gets better throughout its lengthy runtime. There’s a reason fans come running when even the slightest mention of the long-in-development sequel, Hollow Knight: Silksong, hits the airwaves.

Bloodstained: Ritual of the Night

Bloodstained may as well be called “Castlevania: Symphony of the Night 2”. After all, it comes from Symphony’s mastermind and Castlevania luminary Koji Igarashi and carries many of the series’ classic elements while introducing cool new ideas on top. Players explore a gothic castle overflowing with secrets while slaying supernatural foes using weapons such as swords, axes, and, of course, a whip. Killing enemies feels extra rewarding since they drop shards that bestow cool powers that can turn the tide of battle. The more shards you collect, the more comprehensive your ability pool to create multiple loadouts suited for any situation. When you aren’t fighting the forces of darkness, you help surviving townsfolk by completing bounties, farming crops, cooking recipes, and other engaging diversions. Best of all, a ton of post-launch updates have only sweetened Bloodstained’s package. If you’ve been dying for something more “Vania” than Metroid, Bloodstained is a must-play.

Want some pinball with your Metroidvania? Yoku’s Island Express is for you. This imaginative title gives you control of a mail-delivering dung beetle tethered to a ball of poop that you fling around a vibrant world using pinball-style flippers, bumpers, and ramps. Excellent level design means flippers are precisely where you need them to be, and like real pinball, hitting shots at the right angle can send Yoku down secret paths accessible only to the most skilled wizards. It may be pinball, but you still indulge in plenty of path-opening, sidequests, as well as a narrative that ups the ante on gameplay as it unfolds. Yoku’s ingenious blend of seemingly disparate ideas makes it stand out amongst an increasingly crowded genre.

Iconoclasts’ action rocks, but it won many over for its surprisingly mature story tackling faith and the dangers of religious zealotry. The tale stars Robin, a simple mechanic defending her free will and that of her friends against the theocratic rule of an oppressive regime. The strong supporting cast and eye-widening plot twists hook you until the end and should have you reflecting on the adventure long after the credits rolled. Traversing the well-designed world requires solving clever environmental puzzles that challenge players to use their skillset in increasingly ingenious ways. That inventive design extends to a rogue’s gallery of imaginative boss battles. Boasting great action, a wonderful presentation, and a thoughtful narrative, Iconoclasts is the total package.

Ori and the Will of the Wisps

Will of the Wisps improves upon Ori’s first adventure in every way and then some. The already jaw-dropping presentation somehow looks even better, traditional auto-saves replace the original’s weird soul links system, and it feels smoother than silk on the sticks. The acrobatic platforming feels fantastic, and that’s good because you’ll be doing a lot of it thanks to high-stakes escape sequences that push your skills to their limits. Combat plays a more prominent role this time around, with Ori bringing the hurt with satisfying melee strikes. If failing a white-knuckle platforming sequence doesn’t make you cry, Will of the Wisps’ tear-jerking story and sympathetic antagonist ensures there won’t be a dry eye in the house once you reach its dramatic climax.

Like basically every wrestler, Juan Aguacate couldn’t stay retired forever. His return to the ring isn’t radically different than his first bout, but it does prove that he’s still got it. Guacamelee 2 retains the stellar level design of the first game, but a dimension swapping mechanic adds a twist, letting players explore an afterlife version of their surroundings. Some platforms exist in one realm but not the other, and skillfully shifting realities during fast-paced sequences is thrilling. Melee combat remains a blast, and Juan’s chicken form gains new abilities to make it vastly more capable. Best of all, instead of tag-teaming Guacamelee 2 with just one other player, you can explore the game as a faction of luchadors thanks to a four-player co-op.

Ender Lilies: Quietus of the Knights

Ender Lilies is a dark fantasy gem that puts you in the role of Lily, a young priestess possessing the power to cure her blight-infected kingdom. She’s no fighter, so her guardian, the Umbral Knight, handles the eradication of subjects-turned-monstrosities. This effective team grows in membership as you defeat and cure corrupted guardians, who join your cause to lend an array of entertaining offensive options, like archery or spellcasting. Mapping every inch of Ender Lilies’ gigantic kingdom proves rewarding thanks to numerous upgrades, intriguing narrative breadcrumbs, fun traversal mechanics, and enjoyably tough boss battles hiding around every corner. It also helps that the game is quite a looker, with a killer soundtrack to boot.

This love letter to Super Metroid recaptures that eerie sense of isolation but is by no means a retread. As Trace, you’re transported to an alien world following a failed experiment, and the only way to survive is to collect a staggering arsenal of guns to blast through an assortment of bizarre enemies. No two weapons are alike, and every firearm seems tailored to combat certain foes. One fires bouncing artillery. Another shoots wall-patrolling buzzsaws. There’s even a weapon that can distort reality itself. Perhaps nothing demonstrates Axiom Verge’s creativity better than your signature address gun, a tool that causes enemies and environments to “glitch”, altering their behavior and physical makeup entirely. Another highlight is the fascinating story that serves as the first chapter of a carefully planned mythos that continues in the recently released Axiom Verge 2.

The shorthand way to describe SteamWorld Dig 2 is “Better than SteamWorld Dig 1 in every way”. The game remains a compelling loop of digging underground to find treasures, returning above-ground to purchase upgrades, and going back down to see how much further you can dig. Chasing the next cool upgrade or useful ability causes the hours to melt away, and new powers are doled out at the perfect pace. A flexible cog system lets players freely experiment with several neat perks to tackle whatever obstacle lies ahead. Superb puzzle-solving breaks up the routine of digging. Combat, while not perfect, gets the job done well enough. SteamWorld Dig 2 packs a ton of great ideas into a tight package and shouldn’t be missed whether you played the original or not.

Salt and Sanctuary shares as much in common with Dark Souls as it does Castlevania. The FromSoftware-inspired difficulty, progression, class-building, and checkpointing blends wonderfully with the labyrinthine, ability-gated level design. You just have to be willing to take a beating to really see it shine. Stick with it, and you’ll experience an entertaining synergy of engrossing exploration, thoughtful combat, and freeform character customization that keeps you taking hit after hit and asking for more. If things get too nasty, enlist the help of a friend in local co-op. With a sequel in the works, now is a great time to revisit this modern indie classic.

What games on this list do you enjoy? What games would you add that aren’t listed? Let us know in the comments! If you enjoyed this list, be sure to check out our other recent genre list