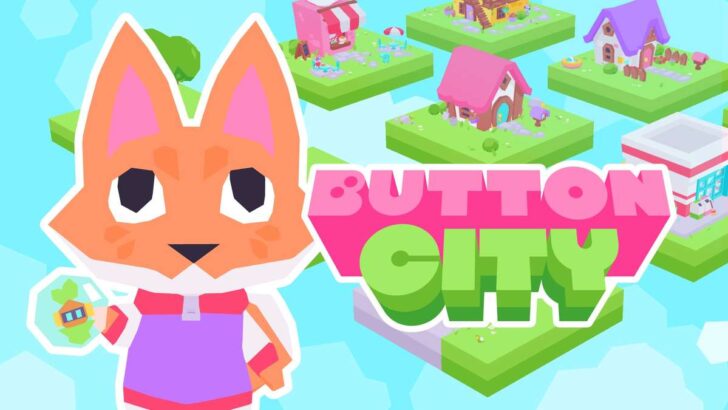 We are Subliminal, a tiny indie studio making Button City: a narrative adventure game about a fox and his friends banding together to save their local arcade from being shut down by a greedy (and literal) fat cat. It’s the ultimate summer vacation adventure! It’s available starting today on Xbox Series X|S, and we couldn’t be more excited to share it with you!

Enter a colorful, pocket-sized world inspired by the nostalgia of childhood in the ’90s and early ’00s — seen through pastel rose-tinted glasses. Play as Fennel, a shy little fox and the new kid in town, as he gets swept up in a whirlwind adventure with the local kids. Follow a story about friendship, growing up and saving the things that are most important to you, and make friends with charming, funny, and relatable characters along the way.

Button City may take place in a cute little diorama world, but don’t be fooled — it’s dense with features and fun! There is much more to it than just the story and the cute art. The main story is punctuated with all kinds of features, including arcade games, mini-games, puzzles, sidequests, item collecting, wearables and more.

There are 3 main arcade games in Button City: Gobabots, rEVolution Racer, and Prisma Beats. These are fully playable games within the game — play on your own, challenge NPCs, and earn tickets to exchange for prizes at the prize counter:

Gobabots: A 4v4 mini-MOBA featuring collectible fruit robots in outer space, and it’s in the middle of a Pokémania-type pop culture moment. All the kids are crazy about it — they’re playing the game, watching the cartoon, reading the comics, drawing fanart, making cosplay, and drinking the officially branded Gobabots soda. Players unlock new playable characters for this game by collecting Gobapods, little plastic capsules with toys inside that can be inserted into the Gobabots arcade machine. Every Gobabot has its own unique weapons and attacks, so collect them all, configure your perfect team, and become arcade champions!

rEVolution Racer: A classic arcade racing game where players drift down backwoods roads in electric cars. This game is based on an in-universe manga starring Evie, a tough bunny girl who works on her own scrappy electric car, the EV Sprinter, which was built by her grandmother. Challenge other kids in the arcade, beat their times, and make your way to the top of the leaderboard!

Prisma Beats: A Dance Dance Revolution-style rhythm game with a full spectrum of funky rainbow visuals and several super groovy tracks. Every song has 2 difficulty modes, and you can unlock new songs to play by buying soundtracks at the local record store. Collect all the songs and show off your moves!

We really wanted every part of the game to have purpose, so there are no useless items in Button City. Every item in the game has some kind of effect, whether it’s a key story item, a wearable outfit, a decoration for your room, or a Fluff Buff.

What’s a Fluff Buff? So, all 3 arcade games can be “modded” in-game using items you buy in shops or earn through completing side quests. These effects are called Fluff Buffs that include new difficulty levels, challenge modes, alternate play modes, and cosmetics (big head mode, anyone?). Collect all the items to unlock all the mods!

We don’t want to give everything away, but there are way more fun surprises and content waiting for you right now in Button City! We hope the game has a little special “something” for everyone. While it’s family-friendly and appropriate for kids, we think adults who are into media like cartoons and wholesome games will love it too!

Thanks for reading and stay awesome!

PS: We have tons of fun digital freebies and minigames on our website to celebrate the launch! Grab some free wallpapers, avatars, printable crafts, and more on https://www.buttoncitygame.com/cool-zone.

☆☆☆☆☆
★★★★★
$19.99
Get it now
Fennel is a shy little fox who just moved into town. After discovering the local arcade, he makes new friends and gets swept up in a whirlwind adventure to save it from being shut down at the paws of greedy fat cat Peppermint Pepperbottom!

Button City is a colorful low poly narrative adventure game about friendship and community. Enter a pastel diorama world inspired by 90’s nostalgia and filled with cute characters to befriend. Complete quirky quests around town, play arcade games, collect fun costumes, solve puzzles and more as you follow a story about growing up and saving the things that are important to you.