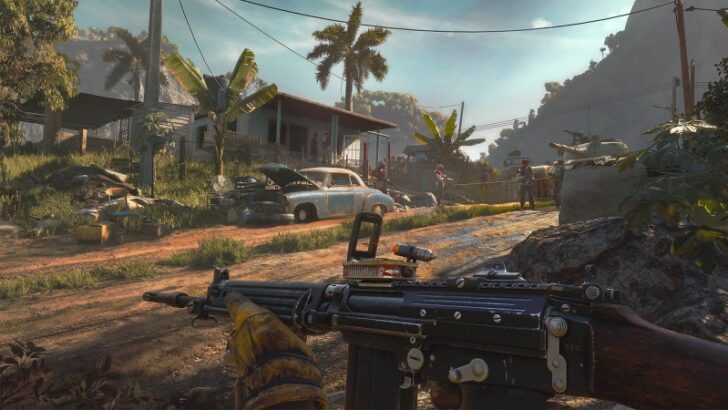 Go to exotic locations. Embrace the countryside. Behold the beautiful wildlife. Kill a lot of people. These are the pillars of Ubisoft’s beloved open-world shooter series Far Cry, and now that our editors have had enough time to play through the latest game, we’ve put these murderous tourism simulators through their paces to figure out which one is the top dog.

Here are all the Far Cry games, from worst to best.

The only critically reviled game of the bunch, Vengeance was a Wii-exclusive remake of Far Cry: Instincts, and it just wasn’t good at all. Like a number of Wii ports of other console games, Vengeance had interesting controls, but ugly visuals and dumb A.I. resulted in what’s far and away the worst way to play Far Cry.

An Xbox-exclusive remake of the original Far Cry, Instincts had to make a number of compromises to get the classic sandbox shooter to run on the console. Chief among them was trimming down the sandbox elements, making the game much more linear than the PC version. The result was a game that feels like its most notable element has been compromised.

The original Far Cry game, developed by Crytek and published by Ubisoft, is radically different than what the series is today. The first game focused on a soldier named Jack Carver as he searches for a journalist on a mysterious island filled with mercenaries and bloodthirsty mutants born from evil experiments. Essentially a sandbox version of Half-Life, Far Cry blew everyone’s minds back in the day. Not only was the non-scripted, unpredictable enemy A.I. stunning but the openness of every level gave you plenty of tactical room to work with when you squared off against them.  Want to go into a mercenary camp quietly, hacking soldiers apart with your machete? That’s viable, as is sniping enemies from afar, or rolling into the camp with a jeep, running over as many enemies as possible before the bullets fly. This all might sound ho-hum now, but back in 2004 it brought a new dimension to first-person shooters.

It’s a shame that the original is so hard to go back to now, especially given just how well the series has evolved under Ubisoft’s guidance.

The black sheep of the family, beloved by just as many as those who hate it. Nearly 10 years later there are still loud pockets of fans (like me) who rally around the game’s divisive malaria and weapons-jamming systems as making the player feel powerless in a genre that isn’t renowned for doing so. However, muddy graphics, so-so gunplay, and infinitely respawning enemies make Ubisoft’s first developmental outing with one of its biggest franchises difficult to return to given just how enjoyable later entries are. Still, Far Cry 2’s narrative is bold and daring, and will likely stand the test of time even if other elements don’t.

For more on Far Cry 2, here’s our review.

This trip to Montana isn’t exactly the greatest, but it’s still a grand old time if you’re willing to look past a toothless story and questionable co-op progression mechanics. Joseph Seed and his weirdo family are rather forgettable, especially when held up next to Vaas or Pagan Min, but the emergent adventures that you can make during your own explorations are among the best Far Cry has to offer. Also, nailing a dude in the face with a flying shovel never gets old.

You can read our review of Far Cry 5 here.

Primal was an important game for the series. After more than a decade of running and gunning around the world, Far Cry was starting to feel a bit samey. Primal, which went back in time and cast you as a caveman fighting for survival, was just the dose of adrenaline it needed. The combat, which traded firearms for spears and stone axes, was meaty and fun, as were the fanged companions you could call to your aid when raiding enemy camps.

If you want to read our review of Far Cry Primal, click here.

Much more than a color palate swap, New Dawn continued Far Cry 5’s story and managed to turn lemons into some pretty solid lemonade! By focusing on Far Cry’s core mechanics (overtaking camps, earning powerful weapons) and emphasizing the series’ fantastic progression system while also adding a dash of Mad Max, New Dawn emerged as one of the most enjoyable entries in the series even if it lacked the provocative elements of other games.

You can read our review of Far Cry New Dawn here.

For all its bluster about telling gripping narratives, Far Cry is often very, very, very stupid – but in a good way. Blood Dragon is the height of Far Cry’s zaniness. More a neon assemblage of ’80s movie references than a story, Blood Dragon throws Terminator, RoboCop, Tron, and Predator in a blender to create something utterly ridiculous and fun.

For our review of Far Cry 3 Blood Dragon, head here.

Cute dogs. Crocodiles in shirts. Giancarlo Esposito. A recipe for success, some would say. As Dani Rojas, you blaze a chaotic trail through enemy territory to usurp the baddie Antón Castillo. Of course, a Far Cry staple, engaging in bonus activities as you work on the core storyline, is also prominently featured.

Side missions and optional content are big on the island of Yara, and you have some serious choices to make as to how you maneuver around as well. From vehicles to wingsuits, your journey is always going warp speed, shooting, scooting, and looting. Giancarlo Esposito ranks among the best baddies in Far Cry as Antón Castillo.

While Far Cry 6 may not be a revolutionary experience taken as a whole, it’s an excellent example of the Far Cry formula done right.

The India/Nepal-inspired setting of Kryat is probably the prettiest setting of the series and rampaging through massive gates while riding an elephant and firing an assault rifle is amazing. For those who like Far Cry’s attempts to tell a gripping story, 4 (our review here) is probably the strongest entry in that regard, too. Ajay Ghale’s pilgrimage to bury his mother’s ashes makes him a particularly sympathetic protagonist, and the story the game crafts is messy but always engaging, as Ghale gets caught up in a divided revolution against Pagan Min, Ghale’s would-be father figure and the most memorable villain in the series except for, well, you know who….

Did I ever tell you what the definition of “insanity” is? With that simple question, demented pirate Vaas became one of the most memorable villains in video games due to his psychotic unpredictability as well as his eloquence. His question is also a pretty good summation of Far Cry as a series, too, with each game upping the ante to try and give you an incredible, adrenaline-pumping experience while also attempting (with mixed success) to make you hold your virtual protagonist accountable for all the terrible things he does. It’s a strange narrative structure, one with built-in foundational flaws, but it’s also engaging in a way that other series aren’t.

Even if 4 and 5 have improved minor gameplay elements since, 3 is the game that ironed out the issues that 2 had to create engaging firefights as well as fantastic open-world survival systems. From setting marijuana fields on fire to torturing your friends to save their lives, Far Cry 3 goes all out in its attempt to balance zany action-packed combat with subversive storytelling. There is no other Far Cry game that captures the successes and inherent flaws in the series as well as 3 does, making the third game the best in this bloody brawl.

You can read our review of Far Cry 3 here.